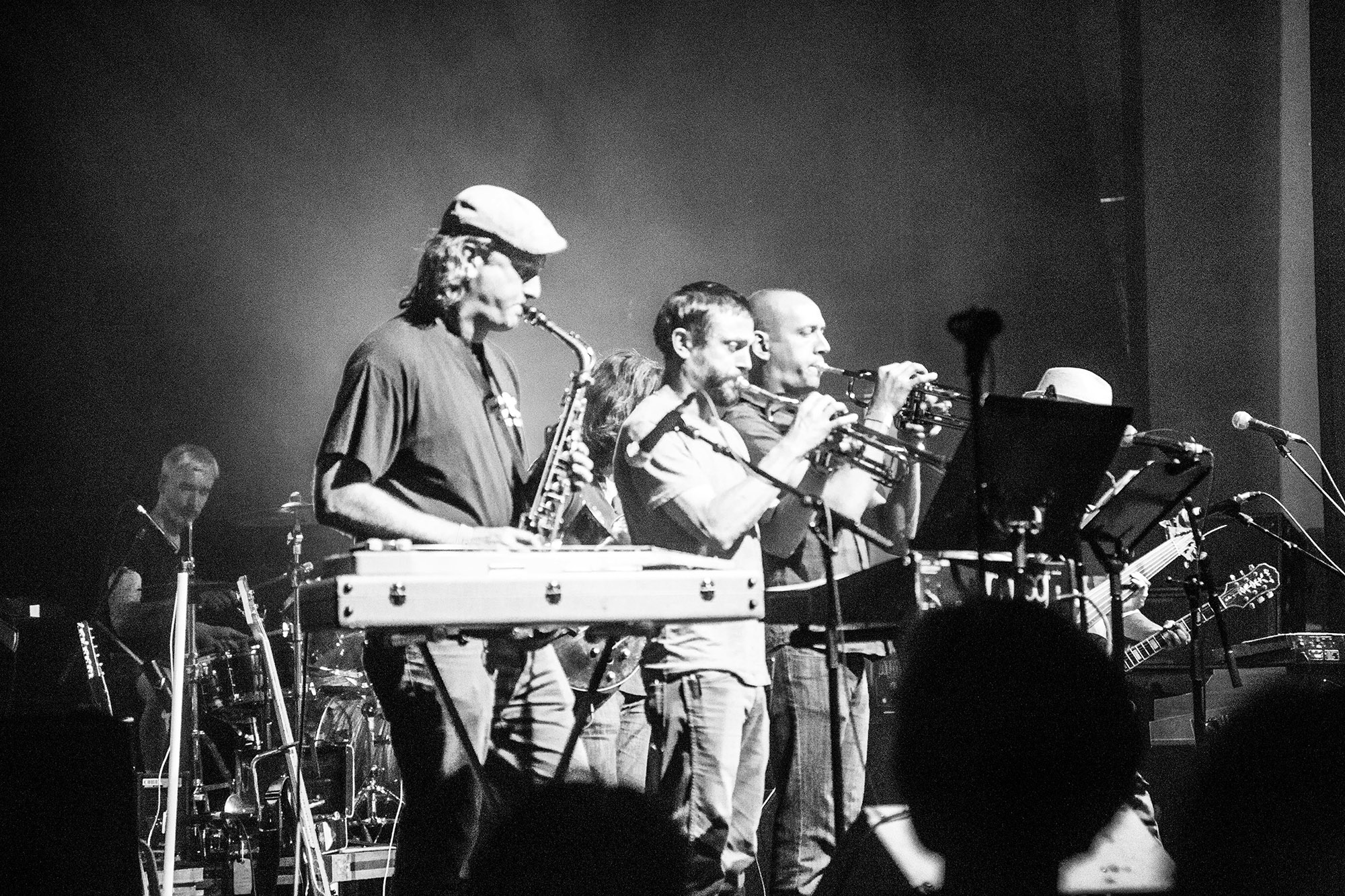 If you were looking for a mosh pit last Saturday, you probably didn't find it at the Danforth Music Hall. But the self-described 'old farts' of Toronto's own Do Make Say Think definitely delivered excitement for the crowd, even if it was more in the form of a mesmerized audience swaying back and forth, bathed in purple light.

Originally an art project which practised in the basement of the CIUT radio building, Do Make Say Think is now over 20 years deep into a career that is as innovative as it is referential. Their music lacks lyrics, but is packed with emotion and energy. The average track length is maybe 9 minutes, and when I first heard it long ago as an artsy 14 year old, it reminded me of Godspeed You! Black Emperor complete with emotional rollercoaster, the jazz drum beat which is reminiscent of a train chugging forward into eternity but without the despair or obvious political messaging of Godspeed.

Do Make Say Think seems to let the audience draw their own conclusions, but each song has a distinct mood to it. But what genre are they anyway? Long-time front man Ohad Benchetrit explained between songs:
"You know about 20 years ago somebody accused us of sounding like King Crimson. At the time I was offended. But you know what, now I think we're in a prog-rock band. And it feels great, not being burdened with the idea of being cool."

The stage visuals did not contradict his assessment. Flickering back lights with visible orange filaments looked more like tea-light candles in the back room of a Kensington Market after-hours from a bygone era. The video projections definitely conveyed early 70's psychedelia: distorted and at times, possibly infra-red footage of the band playing reminded me of the effective yet low-budget effects of concerts from that era.

The band has had the same core line-up since 2000's Goodbye Enemy Airship, The Landlord is Dead but the frontman noted some differences for this show. They were joined onstage by Winnipeg violinist Julie Penner, who apparently learned the songs last minute from files and musical notations that were emailed to her before the show. Penner has performed with The Weakerthans, a quintessential Winnipeg group and also shares the main band members' association with Broken Social Scene, with whom Benchetrit and bassist Charles Spearin also performed. Violin, when it is not strictly classical, always sounds a little bit country to me and I was reminded of American alt-country fiddler Amanda Shires, but filtered through an Osborne Village tinted lense. Penner had her share of solos that the crowd seemed politely entranced by, while also kicking in a violin crescendo or two at the correct accompanying moments.

Drummer James Payment almost did not make it onstage. He was working at his day job (or night job as is so often the case) at a Toronto restaurant when a large pot of boiled water was spilled on his foot. At Sunnybrook hospital, he was told he had 3rd degree burns and the foot may have to be amputated. This story was told with enthusiasm by Benchetrit who used echo effects on words like 'amputate'. However, as he put it, the doctors felt it would be a 'feather in their cap' if they could get him successfully using the kick-drum onstage. So at the last minute, he reported for duty relieving Nick, the drummer for opening post-punk act Mimico from filling in with the headliners.

All is well that ends well. Benchetrit at one point handed somebody in the front row a 20-dollar bill and said "buy one of our records!" by which point the crowd had finally found permission to move around a bit, but not too much: remember this is Toronto. Nobody is going to do much besides nod their heads unless they have permission to be seriously hard core.

Within the last 20 minutes of the show, when the band burst into their hit song 'Do' from 2009's Other Truths, I personally was struck with a powerful sense of time moving forward, of action happening in this world, and indeed of nostalgia.

For a moment I was a teenager again. The world was a simpler place, George W Bush and Stephen Harper were our biggest enemies and at least most people you talked to could agree on who we all hated. But when you hear music like that, you think to yourself: Yes… And yes and yes. One day we will be free. One day we would say goodbye to the enemy airship, one day the landlord would be dead.

The screen behind them faded into static, the tea-lights flickering was replaced by rhythmic intense fluorescent barrages and we moved as one.