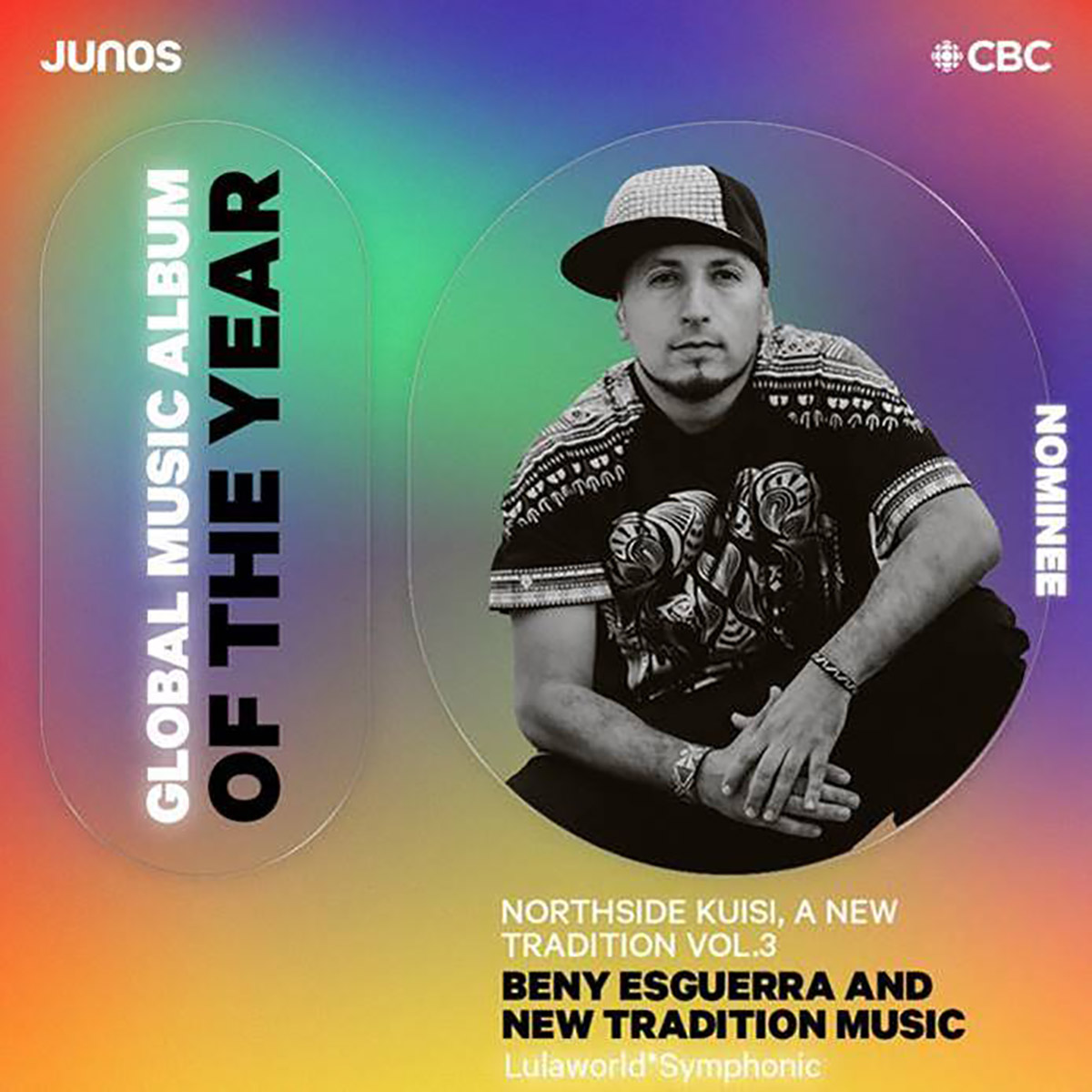 TORONTO – BENY ESGUERRA and NEW TRADITION MUSIC’s current album Northside KUISi Vol 3 (Lulaworld Records) has been nominated for Global Music Album of the Year in the 2022 JUNO Awards, to be held in Toronto on May 15th. Esguerra and his band are celebrating their JUNO nomination with the launch of a three-part mini-documentary on the making of the album. For more information please visit any of the links below and on the website here: https://www.newtraditionmusic.com/

On Northside KUISi Vol 3, Beny Esguerra and New Tradition Music incorporate hip-hop elements such as beatboxing, emceeing/spoken-word and turntablism with Colombian Afro-Indigenous música-de-gaita, champeta and modern cumbia. As with the previous two volumes, the current album delivers an urgent call for justice, environmental healing, and respect for ancestors and land treaties.

To mark the JUNO nomination, Esguerra launches a three-part documentary series on YouTube, plumbing the depths of the album, by delving into the concepts which it explores. Part 1 highlights the Afro Indigenous Roots, instrumentation, and the influence of hip-hop elements on the compositions; Part 2 examines the Condor and Eagle Prophecy, and how it has influenced the works, collaborations, and concept behind the album; and Part 3, in which Esguerra is joined by multi-instrumentalist, arranger, and producer Luis Orbegoso, as they dissect some of the compositional techniques used in arrangements and recordings.

Northside KUISi is a concept album narrated by news reporters from a distant future who speak an ancient, futuristic creole language made up of Lengua-Palenkera, Anishinaabemowin, Spanish, and English. It’s a carefully-woven song cycle of 12 songs with an extra seven hidden compositions that collectively chronicle the discoveries of an archeological dig, where traditional instruments from the Southern and Northern hemispheres are unearthed. The instruments found include a flute, a drum and a vinyl disc containing encrypted information from a prophetic time of transition for the world circa 2020 AD.

The album reflects Esguerra's experiences as a child who arrived with his political activist parents as refugees to Canada from Colombia. The compositions explore issues such as the mass exodus from South to North, environmental degradation, the celebration of instruments and traditions, global indignation to systemic racism and oppression, and the need for community collaboration and healing.

Inspired by the ancient prophecy of the Condor and the Eagle – which foretells the reunification of nations across the Northern and Southern hemispheres – Colombian-born, Mestizo, multi-instrumentalist and lyricist, Esguerra enlists artists from the North and South to collaborate on his works that also create bridges across diverse musical genres. Instruments included are the kuisi bunsi (Indigenous-Colombian flute), the hand drum (from Turtle Island), and the turntables (as used in hip-hop culture in the Bronx, NY).

“Northside KUISi strives to create a dialogue between past, present and future while imagining a future where our decendants, languages and traditions thrive” – Beny Esguerra