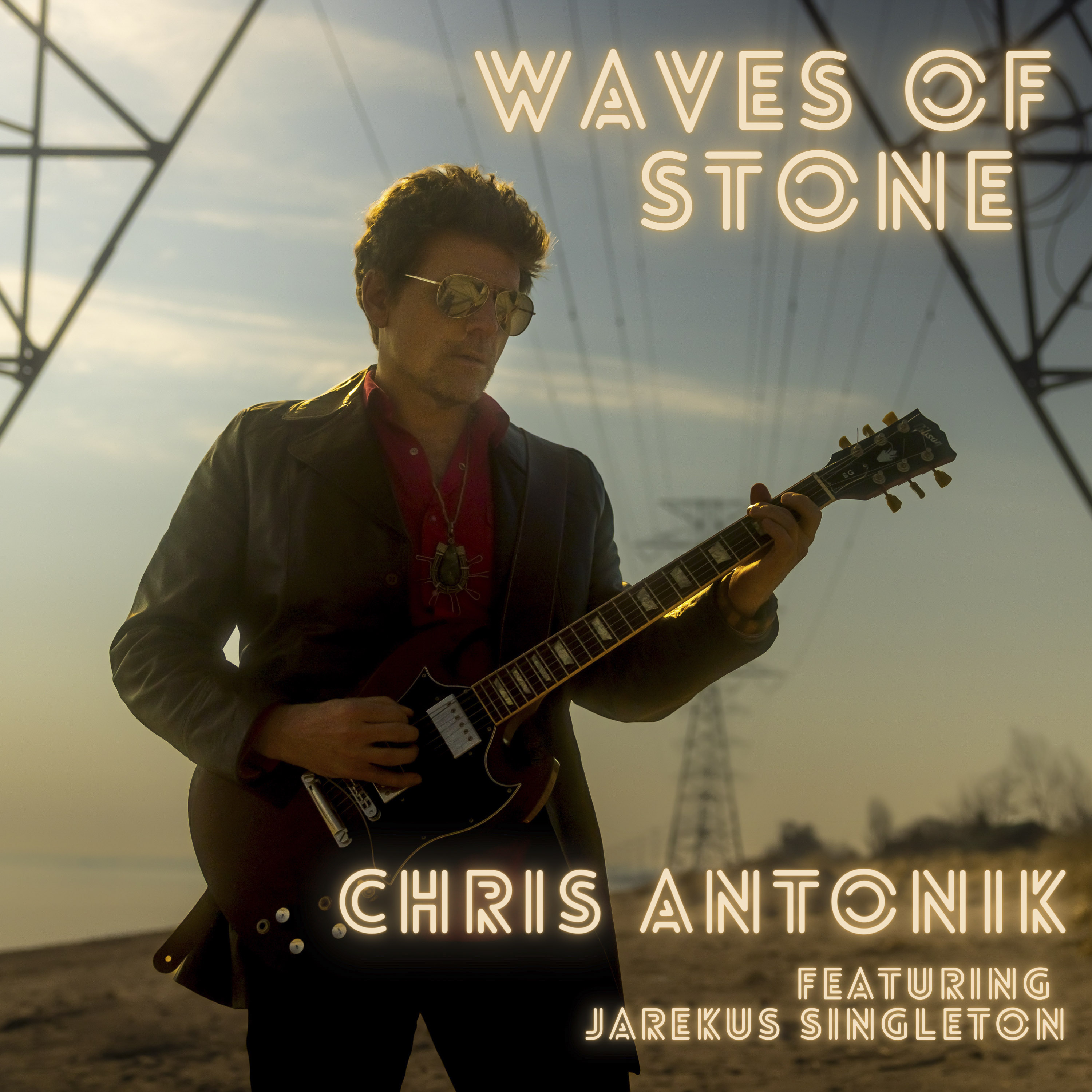 Lack of communication between two people can sometimes be construed as stonewalling and being shut out hurts — bad. Multi-award-nominated Canadian blues-rock artist Chris Antonik gives voice and guitar wail to that searing pain in his new single, “Waves of Stone” – check it out on YouTube here:

The song tells the story of pain and loss, but also a new future forged through facing one’s grief. In the narrative, we hear about a partner named Rosie whose silence is deafening; when she finally speaks, it’s like an avalanche.

‘You built up such a sneak attack,’ Antonik sings.

‘Hey Rosie!
I don’t know why, you never talked to me
You kept it all inside, left me guessin’
You never spoke to me’

The corresponding video has Antonik in a leather jacket (with a noticeable Lou Reed vibe) amidst scenes panning a sparse, sun-drenched outdoor landscape with scorched grass and looming utility poles, and then a dark smoky bar with the whole band playing. The camera focus is on the deft musicality, and the mood of both night and day is of being left utterly bereft.

“In early 2017, I had started a new life after a divorce, and I made the mistake of getting into another relationship too soon after this,” Antonik explains. “Driven by a fear of being alone, and to soothe my grief from the divorce, I dove in — which was a bad move.

“The relationship lasted about a year,” he continues, “and the pain and anguish I experienced when it ended were compounded by the fact that I was still grieving my divorce.”

Ultimately, the experience was one of growth. “It led me to re-think my life, and to get sober,” Antonik shares. “Alcohol was a problem in my life, and I have not had a drink since January 2019.

“It also helped me to re-prioritize my life as a single parent, begin a meditation and mindfulness practice, and, ultimately, to stop jumping into relationships so quickly.”

Since his nomination for Best New Artist at Canada’s Maple Blues Awards in 2011 following the release of his debut album, Chris Antonik has been delivering innovative and thoughtfully crafted songs that transcend limitations or expectations of genre. His sophomore album, Better for You, was hailed by critics as “the best Canadian blues-rock album of 2013,” and “a masterpiece” — with American Blues Scene calling it the “sound of someone taking the blues to a new place.”

Chris Antonik’s third studio album, Monarch (2017), further expanded the blues’ thematic and musical boundaries into blues-rock, soul, and Americana; it was nominated for Recording of the Year, with Antonik as producer, at the 2018 Maple Blues Awards, while also having the Toronto-based artist nominated for Songwriter of the Year.

Not to be stopped by any pandemic, Chris Antonik developed a wealth of powerful and captivating material for his highly anticipated fourth album, Morningstar, to be released this summer.