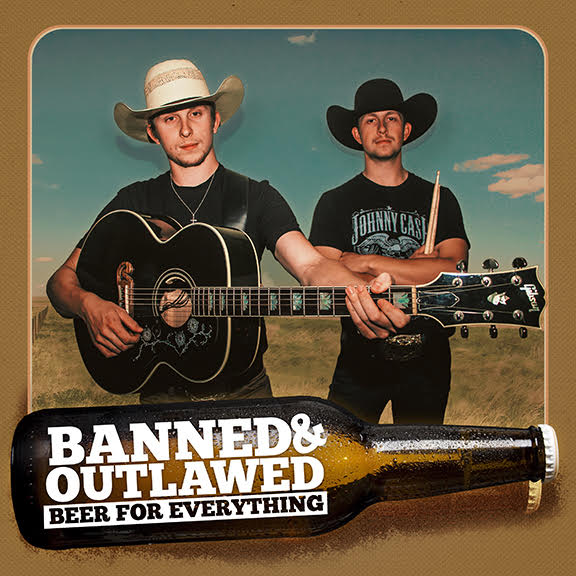 Canadian country duo Banned & Outlawed are back with another bangin’ backwoods anthem in their latest track, “Beer For Everything”. Bandmates and brothers Jon and Dan Hnatishin say the new single is far more than “just another mindless, beer-slingin’ song…

“This one tugs a bit on your heartstrings while leaving plenty of room for a good time,” Jon says. “It’s about growing up and learning lessons. It stands right beside you while you crack a cold one after a hard day’s work,” Dan adds. “Heck, this song’s been with you since you stole that first drink from your parent’s basement fridge.

Watch and listen to “Beer For Everything” here:

Recorded and produced with Golden Oak Record Co’s Greg Arcade and Nathan Kehler, the track proved an interesting experience for the band and production team due to an unexpected location change mid-way. “During the tracking, Greg had an opportunity to move into a new studio space, which resulted in everyone having to come with him,” the brothers recall. “At the end of the day, the new creative space allowed for a heightening of creative quality, and the final production feels very organic and smooth.”

Studio recordings are par for the course now for the pair of siblings who sawed their first fiddles at ages three and four, respectively. With roots in the town of Hazelridge, Manitoba, the rural young-guns have performed in and around Canada’s western-most provinces at just about every county fair, rodeo, or town event imaginable.

“It doesn’t get much more country than growing up in small-town Manitoba,” they share. “It’s all cutting up dirt roads or drinking ice-cold long-necks at a bush party… We wanted to make music for that.”

“We play newer country music with our own twist, and we like to go big or go home,” Dan says. “We’re looking to do right by country music in a big way… We keep it modern with production while believing in traditional sensibilities in the songwriting.

“Business in the front, party in the back,” Jon adds, laughing. “Just kidding… No mullets here. Yet!”

“Beer For Everything” follows the premiere release of Banned & Outlaw's premiere release, the internationally radio-featured “Write A Song,” and precedes their forthcoming debut album.