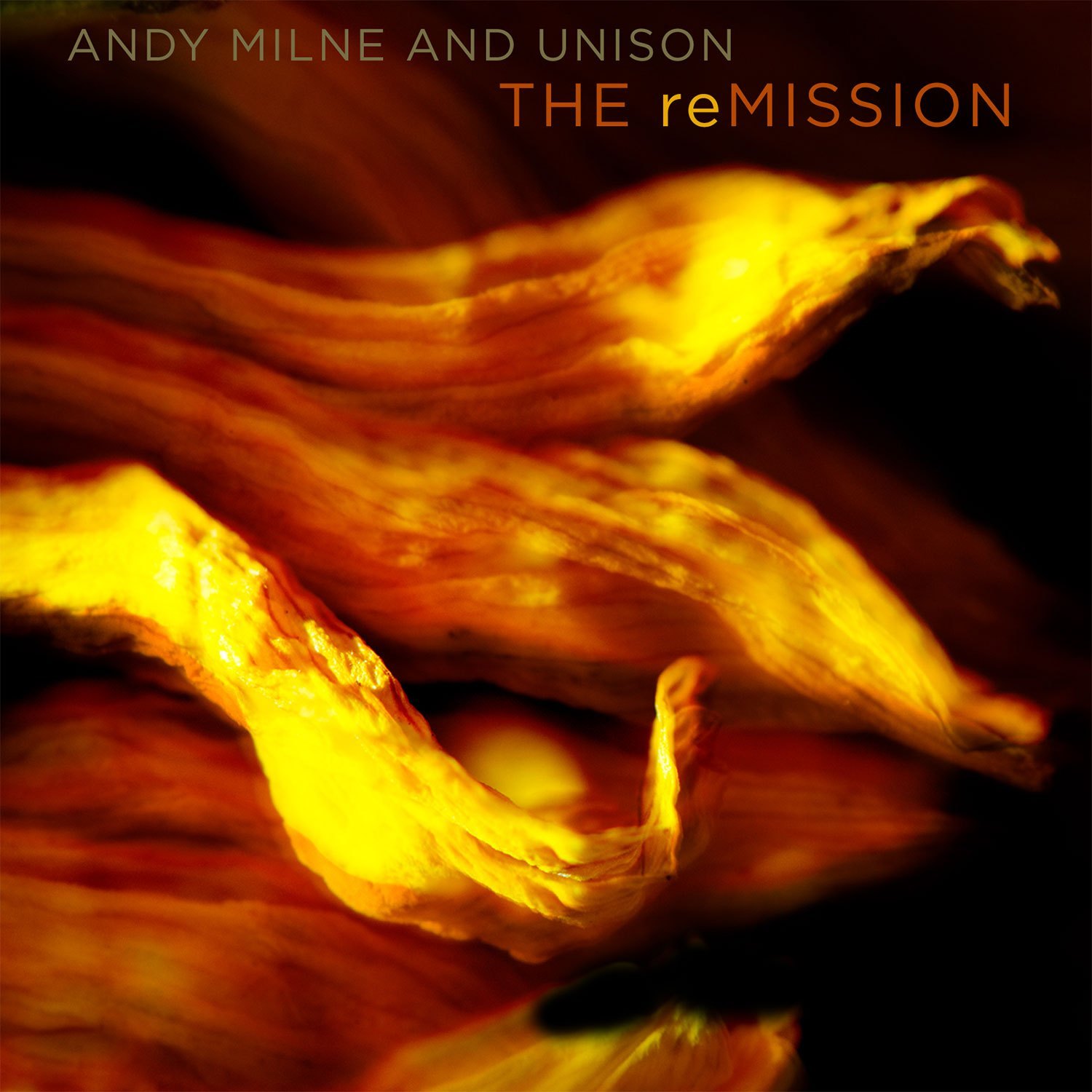 Esteemed pianist, bandleader and educator Andy Milne is excited to announce the release of his new album, The reMISSION, out April 10 on Sunnyside Records with his new trio Unison. Marking Milne’s first foray into piano trio performance, the album is a stunning shift in direction in the artist’s illustrious career. In late 2017, a life-changing cancer diagnosis forced Milne into a period of reflection over his fruitful career, a reevaluation of his direction as an artist, and finally, remission. Added to the mix was an unexpected offer (which he accepted), for a full-time professorship from The University of Michigan. After conquering his diagnosis, Milne seized the opportunity to tackle a musical venture that he has always found exciting, and at times daunting: the powerful intimacy of the piano trio format. Juno award winner Milne brings a bold, imaginative sound to this pared-down context, presenting fresh, original material written for this hallmark collaboration between himself, drummer Clarence Penn and bassist John Hébert. Andy will be touring this project throughout the United States and Canada upon release; see below for full details.

Milne’s focus on composing for larger ensembles is best represented by his stellar work with his long-standing group Dapp Theory. Formed in 1998, Milne released five albums of inventive compositions for this outfit, the last of which, 2018’s The Seasons of Being, won ‘Group Jazz Album of the Year’ at the 2019 JUNO Awards. After twenty years of creative output in that esteemed quintet, Milne’s decision to create the trio Unison has yielded bold compositions that seem to emanate from within the pianist’s core, performed by an artist with a heightened conviction and supported by a steadfast rhythm section made up of Penn and Hébert.

“In jazz,” Milne remarks, “the trio is perhaps one of the most heralded and revered configurations for pianists. Throughout most of jazz’s ongoing evolution, the piano trio has been the backbone of the rhythm section and thus represented and defined the textural palette and rhythmic heartbeat for many groups of all sizes. As a stand-alone entity, the piano trio has often been the backdrop wherein pianists establish their reputations and define their pianistic vision. For me, the decision to present who I have become as an artist in the trio setting involved a reckoning and a certain degree of artistic and technical evolution in order to both embody my past projects and forge a new path forward.”

While Milne’s journey reflects a reversal of the jazz pianists’ time-honoured practice of starting their careers with a trio and tackling larger configurations later, this decision has paid off by informing his trio sound with structural and harmonic richness, and masterful interplay atypical to the mainstream of the piano trio idiom. Paying homage to a jazz luminary, the album begins with a spirited performance of McCoy Tyner’s “Passion Dance”, setting the tone for an album wrought with energy and exploration. The trio finds a sweet spot on this simmering rendition with crisp snare pops from Penn, fluid bass lines from Heìbert and cerebral lines from Milne.

Upon listening to “Resolution”, the first original composition presented on the album, one gets a feel for the breadth of the interplay among the three musicians. Milne composed this atmospheric exploration on New Year’s Day as a pledge to create music that plays to the strengths of his personnel. Fittingly, this piece was originally composed for solo piano, which liberates the rhythm section, allowing them to transform the piece with textural musings surrounding Milne’s melodic invention.

Compositions like “Winter Palace”, and “Drive by - The Fall” highlight Milne’s appreciation of the simple beauty of nature, an appreciation perhaps revitalized by confronting a life-changing diagnosis. The ostinato driven “Winter Palace” is a masterwork of tension and resolution, encapsulating the feeling of a turbulent snowstorm. “Drive by - The Fall” most closely aligns to with the music of the Dapp Theory rhythm section writing which Milne was so accustomed to prior to forming the trio. The leader refers to this piece as the bridge between the two aesthetics. Fittingly and perhaps ironically, the track is sequenced squarely in the middle of the recording.

Bassist John Hébert sets up the groove in “Dancing on the Savannah” which also prominently features the sensitivity and reactiveness of drummer Clarence Penn. Speaking to Penn’s excellence, Milne notes, “He and I have known each other since we both moved to NYC but had never performed together. Every time I heard him perform, I found myself fixated by how his sound, time and finesse elevated whatever band with whom he was performing.” Rounded out with Hébert on bass, Milne notes that the trio’s collective conversation guides their path towards the intersection of their combined sensibilities -- an intersection of “joy, risk and trust”.

More Information About the Artist:

For more than 25 years, Juno Award-winning pianist/composer Andy Milne has demonstrated boundless versatility, collaborating with dancers, visual artists, poets and musicians spanning jazz, classical, pop, folk, and world music. With UNISON, enriched with creative insights from all his projects, Milne returns to his first love, exploring the intimacy of the piano trio. The synchronistic relationship Milne has enjoyed with bassist John Hébert since 2010 is matchlessly rounded out with drummer Clarence Penn, who represents complementary threads within the fabric of Milne’s piano trio philosophy -- the intersection of texture and groove.

A former student of Oscar Peterson, Milne has performed with a range of artists including Cassandra Wilson, Ralph Alessi, and Bruce Cockburn, and has composed, performed and produced scores for seven films by acclaimed actor/director William Shatner. A distinct and respected voice at the heart of New York’s creative jazz scene, Milne was at the center of the M-BASE Collective as a core member of saxophonist Steve Coleman’s bands during the 1990s. He is a Yamaha Artist and sought-after educator, serving as an assistant professor of music at The University of Michigan and the Assistant-Director at The School for Improvisational Music.

John Hébert, originally from New Orleans, has been a highly sought-after New York bassist since the mid-1990s. A former student of Rufus Reid, Hébert has collaborated extensively with pianists Fred Hersch and Andrew Hill, appearing on celebrated recordings from each pianist. He has also performed with Lee Konitz, Paul Bley, John Abercrombie, Kenny Wheeler, Paul Motian, Uri Caine, Bill Stewart, Mary Halvorson, Tomasz Stanko, David Liebman, and Toots Thielemans, among many others. An accomplished bandleader, Hébert’s 2015 Sunnyside release with his quartet Rambling Confessions -- his quartet featuring Milne -- received critical acclaim, including 4.5 stars from Downbeat. Over the past decade, he has been named multiple times as a “Rising Star Acoustic Bassist” in Downbeat’s Critics Poll and has received multiple Grammy nominations. Hebert is a full-time professor of bass at Western Michigan University.

Clarence Penn is one of the most in-demand jazz drummers in the world. A composer, bandleader, and prolific producer, he performs regularly with Maria Schneider, Dave Douglas and Uri Caine. Since 1991 when he arrived in New York City, Penn has placed his unique blend of mega-chops, keen intellect, and heady musicianship at the service of a staggering array of A-list artists including Ellis and Wynton Marsalis, Betty Carter, Stanley Clarke, Steps Ahead, Makoto Ozone and Michael Brecker. His impressive discography includes several hundred studio albums, including Grammy-winning recordings from Randy Brecker and Maria Schneider, representing a 360-degree spectrum of jazz expression. He has toured extensively throughout the United States, the Americas, Europe, Japan, and Southeast Asia. He’s composed music for films and commercials, and produced tracks for numerous singers in the pop and alternative arenas. Whether leading his own band or performing as a sideman, Penn brings unfailing versatility, professionalism and an ability to find creative ways to interpret a global array of styles and idioms.