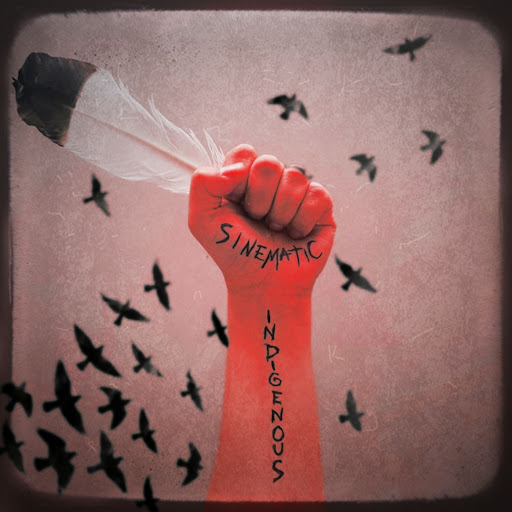 Navigating the depths of reconciliation and the Indigenous struggle, Canadian hard alt.rock outfit Sinematic scorch the soundscape with a blistering new single, “Indigenous”.

The alter-ego of author and composer Ayden Gray, “Indigenous” is the first single to land from the artist’s forthcoming sophomore album, The Dark Circus. The release was produced under NTRTNMNT.ca to craft a soundscape that complements his vision, and the visceral feel of the song was achieved by the sonic craftsmanship of Cree sound-designer/programmer Zachary Ithahokow, Metis guitar maestro Everett Mayhew, and with backing vocals provided by Janessa Von Koppen.

Armed with compositional expertise and stellar production value, Sinematic takes the stereotypical trappings of a hard rock/metal band and refines the formula. Along with the band’s signature sound, the heart-pounding lyrics are a testament to the resilience of Indigenous communities and the pride of a culture that has endured for countless generations.

“I am Indigenous
I will speak my voice out loud
So together we must rise up
After all this time in the dark
They can’t take control of our hearts
Cause we are Indigenous.”

Sinematic released “Indigenous” on Orange Shirt Day in remembrance of all the lives lost during the prominence of Canada’s residential school system. The song is inspired by the injustices that continue to be perpetrated against all First Nations communities, and serves as an urgent call-to-action in addressing the horrors that have tormented Indigenous and non-Indigenous populations for decades.

The lyrical intensity of the track aligns with Sinematic’s overarching agenda: to continue to shine a light on the darkness through the power of music so society may never again affirm a world in which cultural genocide is accepted. Sinematic is challenging the status quo by harnessing his creative talents and aligning with other Indigenous artists to raise awareness in a genre of music typically scolded for promoting controversy and indecency.

Sophisticated compositions seamlessly weave through cerebral conversations on the fight for social justice and equality, and the unapologetic urgency with which Sinematic speaks on the most pressing issues reflects a new consciousness in the newer generation of artists. With Ayden Grey’s musical storytelling ability ensuring Sinematic will be on the frontlines of fighting for Indigenous freedom for as long as it takes, this year’s upcoming release of The Dark Circus follows Sinematic’s 2020 12-track debut LP, Relentless.