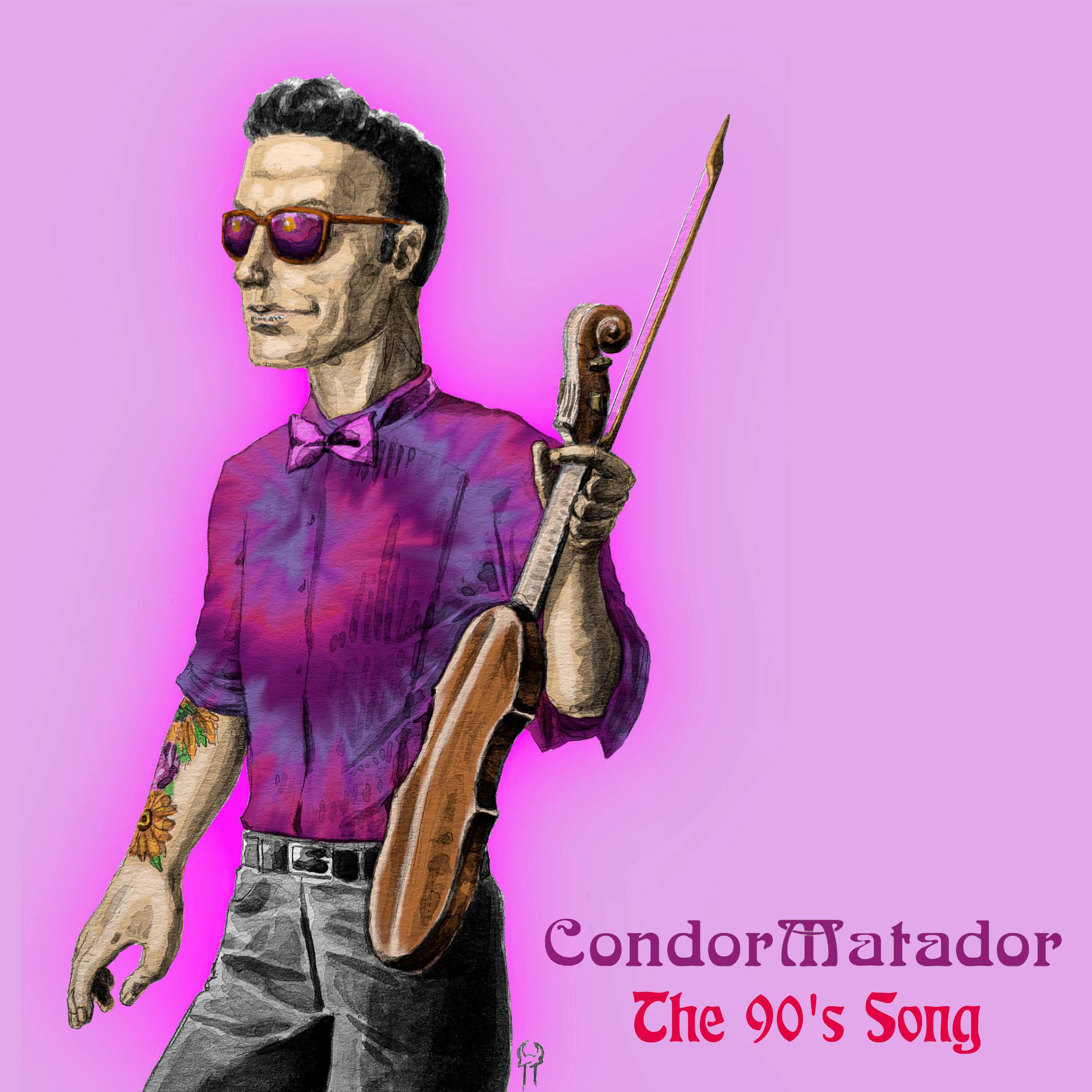 Sometimes the only way to feel happy again is to just fake it ‘till you make it. Montreal-based pop artist Condor Matador, a.k.a Jeremie Legault, addresses that very process in his violin-studded, disco-infused earworm of a new single “The ’90s Song”  - check it out here on YouTube here:

Legault had been in a funk; it was the pandemic, which is funk-inducing for all of us, and he was also working a job he didn’t like and was just feeling blah. Working on Condor Matador was one of the few things that brought him joy and kept him sane during that time; he wrote “The ‘90s Song” when he began making steps toward feeling better and taking hold of his own destiny. The opening lyrics – “As I walked along/Hummed a ’90s song/It was Cher/Do you believe in life after love” – inspired him to apply the disco treatment to the song, because who’s more disco than the diva Cher?

“’The ’90s Song’ is a love letter to disco, written with a punk-rock sneer,” Legault says, adding that the chorus is inspired by “SOS” by ABBA. However, because “The ’90s Song” prominently features symphonic violin accents –- that violin is actually the first thing we hear as the opener – it’s impossible to not immediately think of The Verve’s 1997 hit “Bitter Sweet Symphony” as the song’s touchpoint, while the slightly sneering vocals absolutely evoke the pop punk – Green Day, Blink-182, The Offspring – of the ’90s.

Though the song features acoustic guitar elements provided by Legault, he commissioned Marky Beats (Marc Dupre, Domeno, Jonathan Roy) to produce a disco and funk style beat to go with the music. Legault was also able to involve Andrew Wan, two-time JUNO award-winning violinist and concertmaster of the Montreal Symphony Orchestra, in the making of the song. Meeting Wan was kismet, he shares. “My sister-in-law, photographer Erika Rosenbaum, had just taken some headshots for Andrew, and he happened to be visiting my brother’s farm on a day when I was helping him with a few things. We connected, and he said that he’d be interested in collaborating on a song.”

Wan went to Legault’s condo and they spent a fruitful evening recording his violin parts. “He was such a good sport and a wonderful collaborator,” Legault says.

“The 90’s Song” will be included on the upcoming Condor Matador Album, Dirty Thirty — slated for release in June 2022. “I’m turning thirty this year, and I’m putting together a collection of songs that I feel encapsulate how I am living through this time,” he reveals. “There will be happy songs, and there will be sad songs. I might even do a ballad.

“I’m really challenging myself on this release.”

Legault will continue to work with Marky Beats, and he also plans to involve the producer Frame. The album will include a collaboration with singer-songwriter Yzabo, and will feature rock, pop and electro influences.

Formed in 2018, Condor Matador has been described as the rock n’ roll love child of Ed Sheeran, Blink -182, and just a little bit of Phil Collins. The brainchild of frontman Jeremie Legault, the project seamlessly mixes pop production techniques, fluid rock ‘n’ roll sensibilities, and impeccable songwriting. The result is a unique and uplifting experience that will leave you with a song in your heart that you just can’t shake.