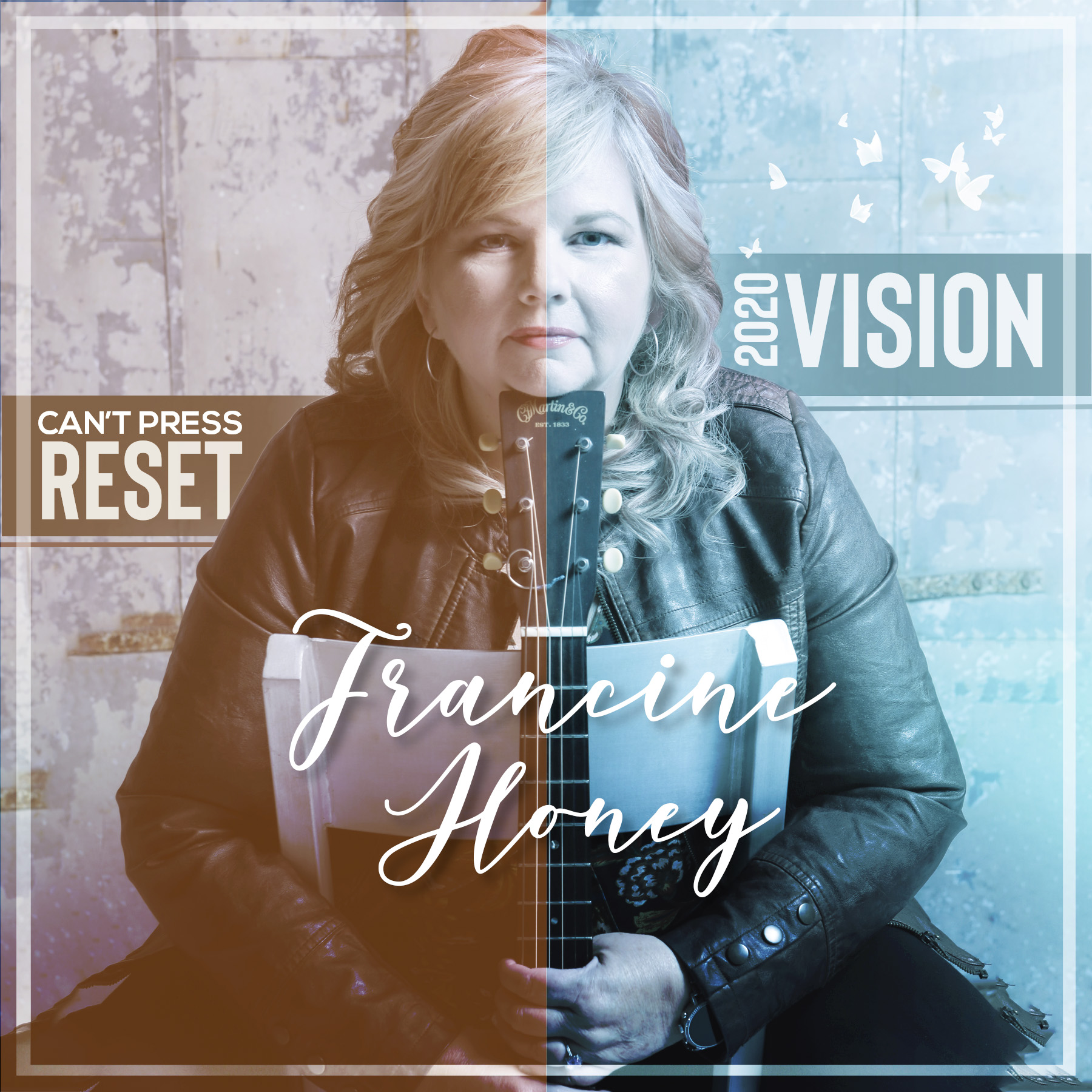 Life can change in an instant. That saying has never been more relevant than it is today. In the blink of an eye, our world has been turned upside-down and forever changed by pandemic and protest, political upheaval and climate change, racism and revolution. Thankfully, there are glimmers of light in the darkness: Neighbours who help each other. Activists who campaign for change. And artists who unite us with timely, touching works, like Francine Honey's new double single "2020 Vision” and “Can't Press Reset”.

"’2020 Vision’ is a song about what was supposed to happen in 2020," the Ontario-based singer-songwriter explains, while "’Can't Press Reset’ is a song that summarizes what has actually happened in 2020 and a transformational call to action.”

Like all of us, Honey had big plans for the year — some that were decades in the making, as she relates in the soulful piano ballad “2020 Vision.” "’2020 Vision’ speaks to working towards a goal in your life and, to many of us, that is retirement,” she muses. “Looking forward to the days when you don't have to work so hard to earn a living, when you are free to do what you want to do.”

“I had all kinds of dreams and plans for what would happen, what I would do when I retired.”

And like all of us, those goals were instantly dashed when "the world, the whole year and all our plans went down the tubes,” as she chronicles in the gently chugging straight-up Americana folk-rocker “Can't Press Reset.” "It is a song that speaks of the transformation that is required when more than just a simple fix is needed. Whether it is dealing with a world-wide pandemic, systemic racism, or with situations in your own life where you feel trapped and/or unable to breathe. It is a song that has lyrics with many layers if you are willing to dig down deep into the issues that lie ahead, and the question of what comes next?”

Like most of her work, both tracks are personal yet universal. And while they are unafraid to confront the darkness, they offer a light at the end of our current tunnel.

Cut as always in Nashville with GRAMMY-nominated producer Neilson Hubbard (Mary Gauthier, John Prine, Jason Isbell) and a roster of first-call players — though "Can't Press Reset” was finished in her home studio after the pandemic hit — the two songs are the latest preview of her upcoming fifth project entitled Unfinished Business. Previous glimpses include the singles “I Carry On” (written with songwriting friend and neighbour, Robert Gray) and “Red Sky,” a gritty and dreamy flight through change released in October 2019.

For Francine Honey, her own flight through life's changes has been years in the making.

A mother of two, the former federal civil servant is finally living the dream: She has the love of her life, and the career she long denied herself. Little did she know she'd ever be a professional songwriter. Although she's made music since childhood — "I wrote my first song in 1976" — Honey never dreamed of making it a career. Instead, she studied math and computers, got married, had kids and worked as a project manager. Her life seemed perfect. Then a near-simultaneous breakup and job loss forced her to relocate, find a new career and raise a family alone. Music went on the back burner; she never stopped writing, but songs went unfinished — until her kids fixed that.

“When my 18-year-old daughter and 16-year-old son kept telling me to ‘get a life, Mom!’ they really were showing wisdom beyond their years. After spending time thinking about what my life would be after they left the nest, I realized I had stories to share, and there was still an opportunity for me to at least try and turn my musical hobby into my profession.”

So, she left her federal government job in 2013 to pursue music full-time under her maiden name Francine Leclair. Along the way, the down-to-earth artist has displayed extraordinary dedication to her craft. She self-produced her 2008 debut album An Ordinary Woman in her living room. It was followed in 2014 by Re-Drawn, produced by Lang Bliss in Nashville. The latter includes the song "I Soldier On" and its French partner "Je Vis Sans Limites" in support of the Soldier On fund in Canada. In 2015, she also re-recorded many of her early songs for the EP An Ordinary Woman (In Studio) with Mark Plancke of SharkTank Productions in Windsor, ON.

Honey took a few years to work on her craft, studying, exploring and chasing her sound. In 2018, she began working with GRAMMY-nominated producer Neilson Hubbard in Nashville, TN. Honey recorded her full-length album to be continued… live off the floor in six days. to be continued… has received critical acclaim Internationally, and her song “Stay” was a finalist in the 2018 International Songwriting Competition in two categories; Honey’s songwriting was recognized from more than 19,000+ entries around the world, receiving semi-finalist nominations in both the Americana and Blues categories. In addition, “Stay” was a semi-finalist in the 2018 Canadian Songwriting Competition (Folk/Singer/Songwriter). The Austin Songwriting Group in Texas awarded her first-place honours in the Country category for “Stay” and first place in the Singer-Songwriter category for “Can’t Break Through To You” in April 2020, along with five other song placements including third-place honours for “I Carry On” in the Inspirational category.

2019 saw Honey release a few singles, starting with “Flocons de neige sur mes cils,” the French counterpart of “Snowflakes On My Eyelashes.” This was followed by “Chez mon oncle Lucien,” a song written around the Hangman’s Reel that her grandmother used to play on her violin.  This song is a traditional French-Canadian song with the memory of doing maple syrup at her Uncle’s farm. The full-length holiday album Take Me To The North Pole was released in December 2019.

Honey’s music has received critical acclaim and sees airplay on CBC, Radio-Canada, BBC, AM800, CTV, SiriusXM, Folk Roots Radio, and more across Canada, the US, UK, Germany, Australia and the Netherlands. Her over 20k+ fans online are very happy she left her government career to pursue music full-time. She performs regularly on-line with her series “Honey In Your Coffee” and streams almost every live venue performance.

Her belief that music gets you through life and her commitment to helping people feel less alone by sharing life through song connects people across the world to support each other. Most recently, her campaign last year to touch those suffering with grief through the holidays with her song and video “Snowflakes On My Eyelashes” and the French counterpart garnered over 1.5 million views, but most importantly continues to connect people grieving from all over the world. It’s no wonder that the stunning video for “Snowflakes On My Eyelashes” was a finalist in the UK Songwriting Contest.

As a graduate of the Berklee College of Music Professional Singer-Songwriter Certificate Program, Honey regularly makes the nine-hour drive from Ontario, Canada, to song-writing retreats in Nashville, where she has been mentored by icons like Beth Nielsen Chapman (who contributes backup vocals to Honey's “Snowflakes On My Eyelashes”), Mike Reid (I Can't Make You Love Me), Mary Gauthier (Mercy Now), Verlon Thompson (Boats to Build), Gretchen Peters (Independence Day) and Jonatha Brooke (Put the Gun Down). She is a member of the Americana Music Association, Songwriter's Association of Canada (SAC), Nashville Songwriter's Association International, and Canadian Country Music Association, and co-ordinates the SAC’s Leamington & Windsor Regional Writer's Group, mentoring other songwriters.

Honey has showcased at the Texas Songwriters Symposium four years in a row, NSAI Tin Pan North Festival, Hugh’s Room, the WinterFolk Blues and Roots Festival in Toronto, the Kingsville Folk Music Festival and the Folk Music Ontario conference. Francine’s music and songwriting have not only taken her through Canada and the U.S but to the U.K., Switzerland and Italy.

She continues to co-write with other artists, aiming to have her music recorded by fellow performers and licensed for TV. "If I could get a song on a TV or Netflix series, that would be cool," she laughs. "But really, I just want to keep going, writing better songs. I'm finally a songwriter and I know I'll do this the rest of my life.”