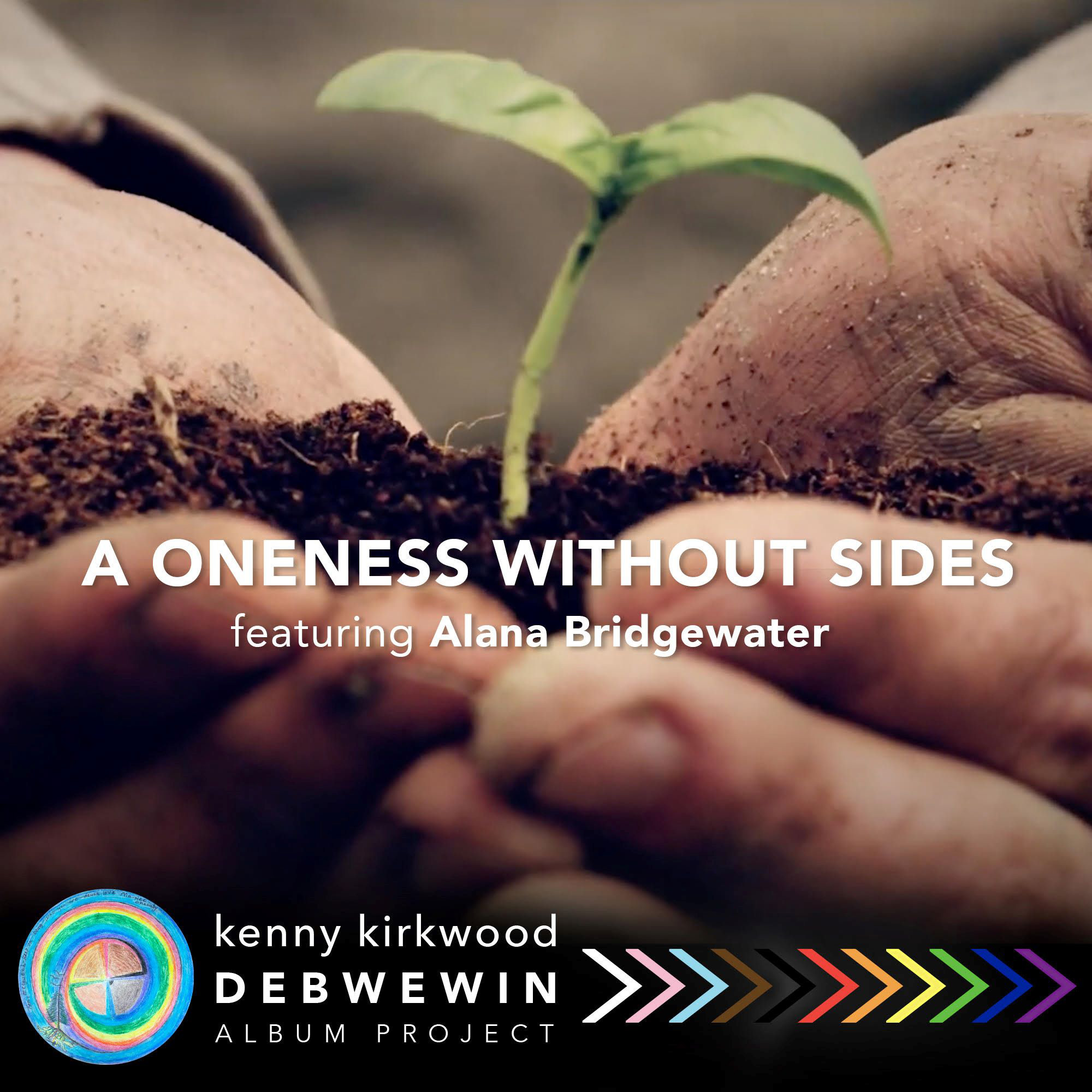 Award-winning Toronto-based musician, educator, and “folktivist” Kenny Kirkwood is sharing his heart-truth and hopes for a future of healing in this, his new single featuring singer/activist Alana Bridgewater, “A Oneness Without Sides”.

A thought provoking soul-anthem for peace on Earth, “A Oneness Without Sides” is the third single released in advance of the JUNO Award-winner’s upcoming album project, DEBWEWIN: 13 Songs for 13 Moons.

Check out “A Oneness Without Sides” on YouTube here:

Debwewin is an Anishinaabemowin expression referring to one's heart-truth. With the album’s songs created with Indigenous people’s guidance for reconciliation, “A Oneness Without Sides” joins the forthcoming LP’s previous singles, “Let’s Turn the World Around” and “Spirit You.”

“It reflects my journey to acknowledge the heart-wrenching truths about global capitalism and environmental damage,” the Toronto-based artist explains of writing “A Oneness Without Sides” in 2002, during a time of tremendous personal growth and discovering his own debwewin. "Now, in 2021, there is tremendous opportunity for Canadians for collective human healing.

“Following the painful acknowledgment of the past and present genocide happening on Turtle Island, many settlers are seeking peace by connecting with Indigenous ways of knowing and being. I’ve found a few good paths. Build good relations with our treaty partners in Canada. We can help each other find the way back to talking like we're people.”

Kirkwood’s beautifully honest, forward focused lyrics in “A Oneness Without Sides” are showcased by a supremely talented and lauded collective of Toronto area musicians. Alongside Kirkwood, Gemini Award-nominated actor, singer, and activist Alana Bridgewater lends her powerfully soulful vocals to a string arrangement by Andrew Downing, with Michael Occhipinti on guitar, Carlie Howell on bass and Dave Clark on drums; the track was mixed by Joe Lapinski, and mastered by FEDGE.

“I’m honoured to be a part of this project,” Bridgewater — best known for her role as ‘Killer Queen’ in the Mirvish rock musical, We Will Rock You, as well as roles across a multitude of theatre, film, and television titles. ”I really hope it resonates with the masses.”

“The music conveys a hopeful longing for a better future,” Kirkwood says. “One found through community, and that honours Indigenous people and wise teachings.

“Care for the earth, and celebration of differences…” he adds, underscoring the inspiration for the song’s title. “‘A Oneness Without Sides.’”

Addressing hard societal and political truths in song requires conviction, and Kirkwood credits two very highly regarded Canadian musician-activists with helping him find his courage to do so. “Along with Buffy Sainte-Marie, who is a guiding light for so many worldwide, I grew up listening to Bruce Cockburn — and, at a time in my 30’s when I was looking for the meaning in my music, my parents suggested I take inspiration from his messages and actions.

“I then had a pivotal moment while playing saxophone with Gord Downie in 2003,” Kirkwood recalls. “He answered a fan’s question about whether musicians should be political, saying ‘Artists are citizens, citizens are people. If a mic is thrust in front of your mouth, you can decline to comment, but if you have one, I guess you should let ‘er rip. GIV’ER!’

“That gave me a lot of courage to keep writing and sharing my meta-political views through music,” he continues. “Downie said it would take Canadians 150 years to build an actual nation...I figure we may as well get started. Why wait to heal?"

Some of that writing and sharing has come through Kirkwood’s collaborations over the past decade with Indigenous people on Turtle Island, and worldwide, in working towards reconciliation. He worked with Anishinaabe and Onkwehón:we 2-Spirit people to create "Reconciliation Through Music 2017,” and has performed with award winning Haudenosaunee blues-jazz-rock artists such as Derek Miller, Lacie Hill, Joshua Arden Miller, Cheri Maracle, Murray Porter and The Ollivanders. He has also worked with other notable Canadian artists, including Kim Mitchell, Jacksoul, Kevin Breit, NOJO, and Paul Reddick.

DEBWEWIN: 13 Songs for 13 Moons has been designed to platform and engage the Reconciliation discussion, Kirkwood shares, with each track helping keep that discussion — and others about our world’s future — engaged and vital.