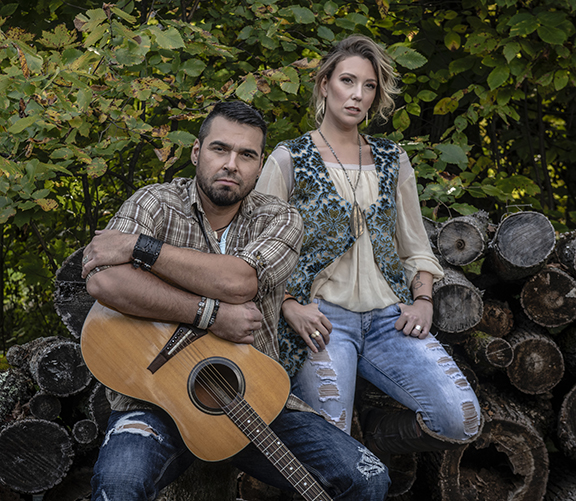 The husband and wife duo of Chelsey June, Métis (Algonquin Cree) from Ottawa, and Jaaji, Inuk and Mohawk from Nunavik, are long celebrated for their sonic landscapes spanning Canada and the Arctic, and honouring their ancestors through song in English, Inuttitut and French, along the way; “Battlefields” is a stunningly poignant addition to their discography.

That said, the new song — and the first preview to land ahead of their forthcoming and third studio album, OMEN — is a surprising departure from music the band has released in the past. Backed by an album teeming with pop and synth-heavy sound exploration, this track’s theme is based on a self-reflective consciousness covering the subject of mental health, a topic that hits home for the band.

“In the Arctic of Canada, Inuit People face the highest amount of suicides in the world,” Jaaji continues. “‘Battlefields’ is a song to remind our people we have to fight our own minds to survive…

“That we are fighters and, together, we can feel less alone and win this battle.”

“Battlefields” isn’t the only track Twin Flames expect to expand their storytelling repertoire; set for release later this year (/season 2020), early insight into OMEN offers an intricate exploration into an edgier, darker musical feel that merges alt-pop, rock, and electronic genres into one.

Using unique sounds, Indigenous Spirit flutes, traditional drums and western instruments, synthesizing harmonies, and traditional Inuit throat singing — including a collaboration with two-time JUNO Award nominees, Silla — Twin Flames unveil in OMEN a raw and honest experience. Certain to follow the successes of their previous two critically acclaimed albums — Jaaji and Chelsey June (2015) and Signal Fire (2017) — Chelsey and Jaaji dive even deeper into stories of courage and survival on OMEN, revealing a true passage into the hearts and minds of the beloved couple, and a gapless release that encourages listeners to take in the entire journey.

“The album is concept-based around a dystopian reality, global warming, and humankind being free of social classes, mental health, and addictions,” they say. “It speaks to seeking Omens and signs of hope within ourselves and Mother Nature.”

Before combining their talents under the title of Twin Flames, Chelsey June and Jaaji had their own respective award-winning and nominated careers; they met on-set during the filming of APTN’s TAM (Talent Autochtones Musical). Since joining together, both professionally and as spouses, they’ve been nominated for 24 awards — including two Canadian Folk Music Award wins, and three Native American Music Award wins — Two number 1 Hits on the Indigenous Music Countdown’s Top 40, played more than 1000+ shows throughout Canada, Greenland, the United States, Australia and France, were selected as artist-in-residence for the 2019 Folk Alliance International conference, partnered with UNESCO to write the official song celebrating the International Year of Indigenous Languages, The song was also chosen as part of CBC’s Music Class Challenge their music video for Broke Down Ski’tuuq was the first all Inuttitut music video to be featured on MuchMusic, and more.