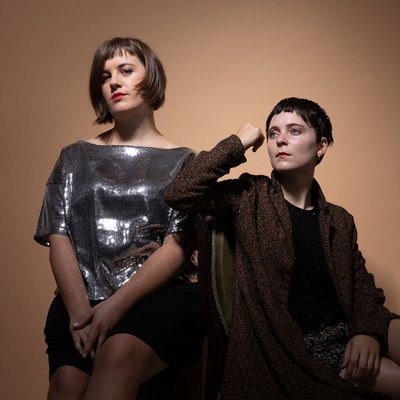 Melbourne, Australia's Oh Pep! are back with their sophomore effort, I Wasn't Only Thinking About You..., out October 26th on ATO Records. Today, the duo share the second single and accompanying video - "Hurt Nobody." 20-year-old director Emily Dynes led an all-female team in the production of the video saying, "'Hurt Nobody' touched me from the very first time I heard it. The song encapsulates a very guttural, raw and female type of pain, so it felt like the natural fit to bring together a young female-led team of creatives for the project. It was an absolute privilege to work on such a beautiful song for a band I deeply admire, and a complete joy to spend three days shooting and dancing across the mountains in the alpine region of Victoria, Australia." The video features performer Cecilia Low.

I Wasn't Only Thinking About You... marks the follow up to Oh Pep!'s critically acclaimed debut Stadium Cake. The return at once captures their spirit, their curiosity, their imminent likability. Throughout, the new LP thoughtfully explores the melody-rich expanse between indie pop and alt-folk, while coming of age and seeing the world. The duo burst first onto the scene with a series of EP's that caught the attention of legendary artists and critics alike. NPR called them "thoughtful, deep, funny, and poetic," and appearance "Tiny Desk" netted them a dedicated and passionate audience stateside that has continued to grow. The New York Times marveled at how adept they were at "sharing a melody that's both angular and affectionate."

Since meeting at a performing arts school in Melbourne, Liv and Pep have wowed audiences with their virtuosity as instrumentalists but it's their storytelling that has won over the hearts of their fans. Being thrust into a life of touring the world after Stadium Cake only gave them a wider pool to net these tales - the people they've met and the wonder they've felt seeing the world make up the vignettes on I Wasn't Only Thinking About You...

Since breaking through the hemispherical sound barrier, Australia's Oh Pep! have become many things to many people. The duo's kinship is palpable not just in the way they relate virtuosically, but in the stories they conjure together and the ways they emote them to the audience.

Oh Pep!- who are releasing their second full-length, I Wasn't Only Thinking About You...(ATO Records) - have always been as driven as they have been wildly creative. The duo met almost a decade ago, and it was fateful. While attending a performing arts high school in Melbourne, Australia, Pepita Emmerichs happened to walk down a hallway past guitarist Olivia Hally. The latter was about to sing a song and asked if Pepi would join her on stage."When we started hanging out," Olivia recalls, "we immediately started making music together." Adds Pepita. "We both loved musicians like John Prine and Lucinda Williams, who hit you really hard with their incredibly honest work. Studying music, we both understood the importance in instruments and arrangement, but we were also really drawn to lyricists."

After graduating, they booked their own tours-mainly clubs or folk festivals-and just never stopped. Finally, in 2015, they entered a contest which won them a slot at the Folk Alliance International festival in America. A few years later, they played another FAI event, where they met Billy Bragg. He invited them to play a show with him in Adelaide. "We walked off-stage at this show, and he was like, 'What are you doing in June?' Do you want to play my stage at Glastonbury?"

They wrapped up over a year of touring their debut album 'Stadium Cake' at Glastonbury in 2017. Over that year they had shared stages not only with one of their heroes in Billy Bragg (although it was Billy Bragg who said to Pepi "I'm not your hero, I'm your peer"), but also Lake Street Dive, Martha Wainwright, Valerie June and The Mountain Goats. All artists they had admired for many years. NPR enthused that they were "thoughtful, deep, funny, and poetic." The New York Times marveled at how adept they were at "sharing a melody that's both angular and affectionate." And Paste magazine opined about their "stomping, earthy energy."

So what do you do after you've reached such goals? You get out of your comfort zone. "This album is a darker form of pop than we have played before," says Pepita. "Basically, Liv wrote a bunch of hits."

I Wasn't Only Thinking About You...thoughtfully explores the melody-rich expanse between indie pop and alt-folk, while dipping into themes of growing older, and seeing the world. Its first single, "What's the Deal With David?" is nothing short of intriguing. They pause. "Well, I wrote that as a note for Pepi," Olivia says of the bright, irresistible sing-along, "that excited energy about two friends talking about their love life." Oh Pep!'s anticipated return at once captures their spirit, their curiosity, their imminent likability.

Things began to change. "I remember in Boston," Pepita says, "Liv was watching a woman in the audience who was singing the words to one of the songs that hadn't been released yet." As a result, Olivia's demand as a songwriter grew. "With this album, in particular, I did a lot of sessions with other people. They weren't necessarily sessions that were for the album. But every now and then, I'd be writing a song and take a fancy to it, then Pep and I would Oh Pep!-ify it together." All told, Olivia penned the album in New York, Nashville, Los Angeles, and back home in Melbourne.

Her travels, from summer 2017 to early 2018, shaped the songwriting. Olivia wrote most of the exquisitely harmonic "YourNail and Your Hammer"-its title inspired by words written on her wall-in Nashville, influenced by the city's love of Americana. Most of Oh Pep!'s tracks were written on guitar, but she and Doug Schadt (Maggie Rogers, The Middle) composed "Hurt Nobody" on the piano during a "bomb cyclone" storm in Manhattan. A spacious, mid-tempo lament, it's haunted by the mantra "I'm coming undone." "There was this underlying eeriness that day. The energy was apocalyptic, because we were snowed in," Olivia explains. "One way of describing the song is that we were in a very warm room, but there was a mad storm outside."

She created the acoustic tear-jerker "Parallel" alongside Daniel James after humming the melody on her way to the Nashville studio. ("I'm always leaving when you come around," she sings achingly, "looking for me in the lost and found.") In contrast, with the L.A.-based Tony Buchen(Tim Finn, Montaigne), "He'll do the bare tracks and be like, 'Come back in two hours with the melody and lyrics.'" That begat the sweetly soaring "Bleeding Hearts."

After writing songs, Olivia brought them back to Melbourne, where Pepita added strings and collaborated on arrangements. "We record some of that stuff in the studio or on the road. And we do some at our homes individually," Pepita says. "Liv and I have the same kind of ideas about what we like, a similar amount of tension and release in our choices of melodies as well. Most of the time we agree on whatever the other comes up with."

They turned to producer Joel Quartermaine (Dan Sultan, Meg Mac) to tie it all together,alongside mix-engineer Marky Wallis (Talking Heads, REM, U2's Joshua Tree). "Joel has a kind of workflow that we really appreciated. He was really positive and a fast worker and had a really good energy about him," Olivia says.

Oh Pep! feel so strongly about the power of collaboration that Olivia created the FUN WITH OH PEP! collaborative songwriting retreat last year, alongside A Good Idea, a grant that gives musicians the money to actualize their visions. Amazingly, they fund it themselves. "It's hilarious because being in a band, you're always strapped for cash," Olivia says. Adds Pepita, "That would have been something we would've jumped at five years ago."

A few years back, Olivia happened to find that list of aspirations they wrote when they were just teens. "We've definitely evolved, but our values have remained the same," she says. "In the early days, we weren't sure how we were going to tour the world. We were just going with the flow in a lot of ways. And we still do."