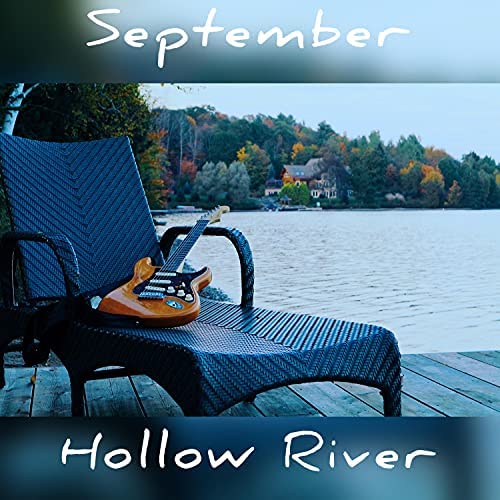 Two months after the release of his upbeat comeback single “Still,” Hollow River — a Canadian pop-punk rapper by the name of Mark MacDonald — has released a rocking new tune called “September.”

Available now, the song lands alongside a simple but gorgeous animated lyric video which pulls you right into the musician’s mind.

Though MacDonald is known well for fusing his rapping abilities with his passion for pop-punk music, this brand-new three-minute, 20 second spanning track is quite a departure from his initial approach. He abandons the rap, for a classic early 2000s-sounding vocal take; think Blink-182 and Good Charlotte!

On top of this, “September” boasts rapid, chugging guitar riffs, enticing harmonic guitar melodies, undeniably radical drum fills and even a brief, yet emotional piano breakdown. It’s exactly what you would want (and more) of any pop-punk anthem!

Just from hearing this song (and all his others), it’s apparent the Boston-based musician (originally from Oakville, Ontario) is an absolute wizard in the studio — whether that be at the control desk, with an instrument in his hands, or just when he’s putting pen to paper.

In his own words, MacDonald says “September” is simply about “living in a toxic moment understanding that that it cannot last forever before the inevitable fall” — which he symbolized in both his lyricism and the entrancing lyric video with the coming of the Autumn season.

“I wrote this song during a period where I was drinking too much and realized that what was once fun was now starting to pull me down,” added MacDonald. “I hope it serves as an allegory for others that have flirted with alcohol or drug abuse.”

While “September” is new to most, it’s actually been in the works for a long time, according to the mastermind behind Hollow River. He admitted what you hear now was actually his third time recording the song, after two attempts he considered to be poor in production quality. Using the skill sets he learned during his four years of post-secondary studies in the U.S., he decided to take another crack at it, and concluded that he is now “excited” to finally have a “killer version” of the song — one he typically uses to close his live sets.

MacDonald’s music career began when he became an intern at Hamilton’s iconic Grant Avenue Studio. After spending some time working at the recording studio, the aspiring star dropped everything to move down to Boston, Mass. so he could attend Berklee College of Music, one of America’s finest music institutes. During his studies, he was working towards a double major in Music Production and Engineering/Songwriting respectively. A few years later, MacDonald decided to take a break and returned to small-town Ontario to focus on his own music career while exploring new professional opportunities on the side.

When he’s not honing in on his own songwriting, he’s a Production Assistant at Revival House Records studio, alongside his mentor, Pat Hanlin; MacDonald also returned to Boston in the fall in hopes of finishing both of his degrees with Berklee.

“September” serves as the rock-rapper’s third overall single and follows the tracks “Still” (released earlier this year) and 2020’s “Known to Lie” — his biggest success to date. On top of these popular and infectious singles, Hollow River has a rocking three-track EP ‘Quarantine Mixtape’ and his 2019, debut album Bleed Only Water, which includes eight originals from the multi-talented musician. The former was released closer to the beginning of the COVID-19 pandemic.