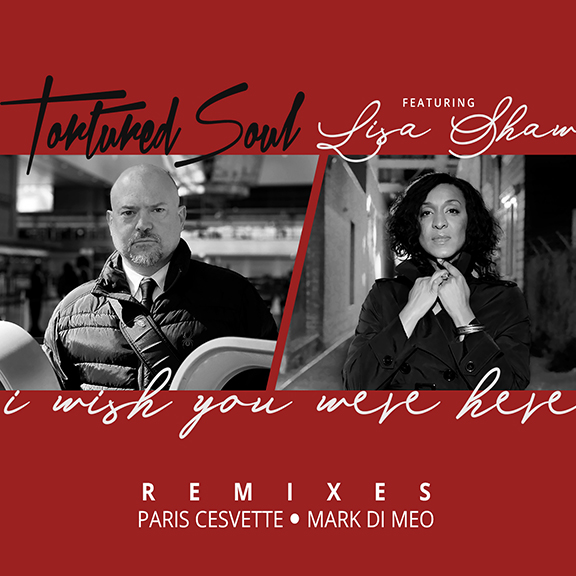 “We’ve always had a great rapport, and I’ve always loved her voice and records. I guess we’ve always just been busy doing our own things and — for no good reason — we never collaborated on any music together.

“One day about a year ago, I started writing this song,” he continues. “It had a classic ‘Tortured Soul’ vibe but I was like, ‘this song is a duet and Lisa Shaw is the right person to sing it with me.’

“It was a moment of pure clarity.”

The rest, as they say, is history; Shaw visited LA to record in Urich’s studio and the results left them both wondering why it hadn’t happened sooner. “It was so fun, and I’m really happy and grateful with the way it turned out.

“Lisa lays down an incredible, unique vibe that lifts the song to the next level.”

Check it out here:
music.youtube.com/watch?v=PAUiFb4WgDc&list=RDAMVMPAUiFb4WgDc

Tortured Soul is 100% live modern, deep, soulful, house music freed from the DJ Booth. Influenced by the classic songcraft of Prince, Heatwave, and Kool & The Gang, Tortured Soul is a collective of incredible international musicians united under a groove-centered rhythm. Frontman and songwriter, John-Christian Urich, leads the group while simultaneously drumming and singing with effortless mastery. Bass (Ernie Mckone, Bryan Ladd) and keys (Isamu McGregor, Randy Emata, Joel Martin) combine to form the pulsating rhythm and melodic joy that is integral to the Tortured Soul sound. Recently, guitarists Adam Rafferty, Kurt Slabbert, and Mark Tewarson have been helping to expand the musical journey and unlock new live-musical pleasures. Likened to "The Roots of House Music", Tortured Soul’s sound is reminiscent of Neo-Soul groups like Jamiroquai or Brand New Heavies, while also being influenced by the contemporary freshness of House purveyors like Joey Negro and Louie Vega and Nu Disco artists like Soul Clap and Purple Disco Machine.

Most recently, Tortured Soul has joined forces with Lisa Shaw for their deep house love duet “I Wish You Were Here”, that has Lisa Shaw and John Christian Urich sweetly serenading each other with reassurance that a blissful time is in store once they are reunited! Despite having been in the deep house music scene simultaneously for years, this marks the first time Tortured Soul and Lisa Shaw have collaborated. Better late than never because the chemistry is undeniable!“I Wish You Were Here (feat. Lisa Shaw) will be made available from the TSTC Records imprint on the Canadian based Slammin Media label distributed worldwide by Believe Distribution.

Growing up in Canada, Lisa Shaw was the last of six children with parents of Jamaican heritage. She’s had many genres of music that have influenced her, growing up in a house full of reggae, funk soul, jazz, folk, rock, disco, and new wave. There wasn’t anything she didn’t listen to or wasn’t open to when it came to music, and it shows in her work to date.

Being in New York, she received a warm welcome from the underground electronic community and released her first single written by DJ Smash. The title “Makin’ Love Makin’ Music” was released in 1995 on New Breed Records. Other independent labels also featured her vocals such as DJ Wally and Swingsett’s “Dog Leg Left” on Ubiquity Records, and her first major hit in the UK, “If I Could” on Sirkus Records. A few years later, Shaw teamed up with Jay Denes, Dave Boonshoft, and Bruno Ybarra of Naked Music Recordings. Her writing partner and producer Dave Warrin collaborated with Jay Denes to create, “You are Love” and one of her most popular songs, “Always” — a track that earned her global acclaim, even the pop queen herself, Madonna mentioned the song as being “so cool” in an interview with Rolling Stone Magazine. In 2005, she released her debut album Cherry with producers and co-writers Jay Denes, Dave Warrin, and Eric Stamile. Shaw has released numerous singles on dance label, Salted Music, as well as OM Records, Large Records, and regularly collaborates with Miguel Migs.

ABOUT THE REMIXERS
Mark Di Meo:
Mark Di Meo Is an International Dj, Producer, Remixer and Soulstice Music Label CEO. His appearances include the biggest clubbing centers around the globe. From Italy, Greece, Spain, United Kingdom, Holland, Switzerland, USA, China, Mexico, Germany, Costa Rica, Emirates, Angola, Mozambique Island, Poland, Japan, North Korea and more. Di Meo has played alongside great ones such as Louie Vega, Kerri Chandler, Terry Hunter, Joe Claussell, Kenny Dope, Hector Romero, Kenny Carpenter and many others. He is the creator and organizer of "Soulstice Music Celebration", "House of Vibes" and "Suevian" which are some of the biggest Soulful & Deep House Parties in Italy and all over the world (Miami WMC, ADE Amsterdam...).

Paris Cesvette:
DJ, Producer, Musician and Label Owner, Paris Cesvette is the most unique & freshest force in music right now. As a DJ she has played and performed at clubs and headlined tours in South Africa, USA, Spain, Ibiza, Germany and her native UK. A classically trained musician with a flair for Jazz and Soul, her debut solo album “Celestial” (My Journey Among Stars) shot to number one in the dance album charts in Feb 2018. Following her success she launched her own label OPOM (Our People | Our Music) to strengthen the community and develop the support for music lovers and creators of her sound, collaborating with highly esteemed artists including Will Downing, Dawn Tallman, Josh Milan, Leee John, Terry Hunter, Frank McComb, Kim Waters, Little Jimmy Scott, Junior Giscombe and Omar Lyefook. Paris possesses a seductive, stylistic House sound which has made her a trailblazer also effortlessly combining Neo Soul, R&B & Smooth Jazz into her deep & soulful dance floor sets.

Tortured Soul is available from the TSTC Records imprint on the Canadian based Slammin Media label distributed worldwide by Believe Distribution.