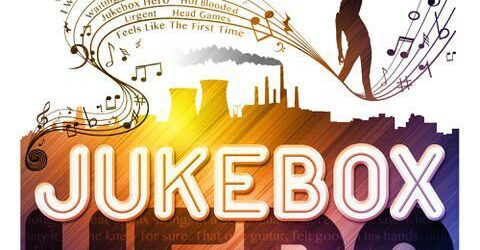 Alone, Mick and Lou have battled back from life-threatening health problems and both have survived. Just the fact that they are both still alive and making music is a miracle in itself.

That is a story much stronger and more enticing for any Foreigner fan than the story behind "Juke Box Hero the Musical".  They could have used the song "When The Night Comes Down" as the source theme and done better.

But which musical, rock musical has a great plot, storyline and script? None really, so we judge the performances and music both great, they just have to release the hounds, kick it up 11 and let the great cast rock it as if their lives depended on it because that is rock ‘n’ roll and the spirit in which the songs were written. Reflect that and it can't be denied because the music is already a part of us!

Like the Queen musical and many others whose songs are past hits, you have to be clever how you present them to the audience who knows and loves the songs. Look at what they did to the Wall in Montreal.

If this show just gets comfortable in its own skin, like the second half of the show, it could find a fun run. Standout performances were an acoustic version of feels like the first time and a rocking Dirty White Boy. In general, the show could be a lot more fun if it stops taking itself too seriously and marinades in the succulent sauce of the songs of Foreigner who provided excellent soulful source material that cannot be denied!

I would pay good money to see Mick and Lou, Foreigner then and now acoustic, talking about the songs and performing, as we did back at MuchMusic... Cheers from the ultimate Spooky Tooth fan, to hear why to listen to "The Mirror", featuring Mick Jones, Gary Wright, and Mike Patto on vocals, one of the best records of the time and it was the start for me of what became Foreigner. Very Funky.