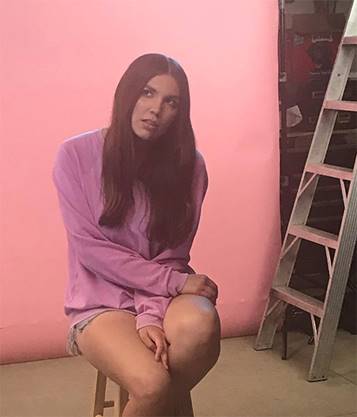 At 10,000+ views and rising, alt-pop, electro-synth and velvet-voiced Saskatoon-based artist velours is cutting through the “Summer Haze” with the release of her new single and EP Identity — both available now.

“‘Summer Haze’ was the most intimate song I had written for Identity, and it’s meant to evoke a feeling of renewal… An escape from an internal cage,” she considers. “The afternoon I wrote it, I was inspired by the realization that it’s okay to not know the ending to the story of my life, and that I’m fine to still be messy. And that none of this makes me any less of a complex and strong person.

“I usually begin writing my songs with the first line,” she continues. “This one was ‘still think I’m messy and I’m intimate / with only myself to fit inside my home,’ and (it’s about) how I know who I am more than anyone else does. The term ‘Summer Haze’ sounds sweet and pleasant initially, but it paints a picture of how we sometimes ignore our feelings and get stuck in the haze of everyday life. The storm represents the harsh reality of experiencing hard times to come out the other side stronger.

“I hope this song shows you can overcome the hardest parts of your life, and that it’s better to face the storm than it is to stay in the haze.

“And that it’s okay to be ‘unfinished’ as long as you remember how capable you are.”

The song reflects the larger imprint of Identity, she adds. “The album is about finding yourself and knowing that that’s a constant journey. There’s a narrative that developed in these four songs, even though it wasn’t intentional when I was initially writing each song individually. I could spend literal hours talking about the lyrics…”

With features on CBC, velours has also been selected for a SaskMusic Songwriting Challenge, a semi-finalist for the Unsigned Only Music Competition, and has performed at the TSAR Showcase, in Yorkton as part of the International Women’s Day concert, and the SaskMusic Open House Livestream.

“velours channels a colourful range of textures and emotions to create earworms well beyond her years,” Versa Films’ Dylan Hryciuk says. “The Identity EP speaks to an artist who is unapologetically a work-in-progress, which is powerfully vulnerable and something we can all relate to.”