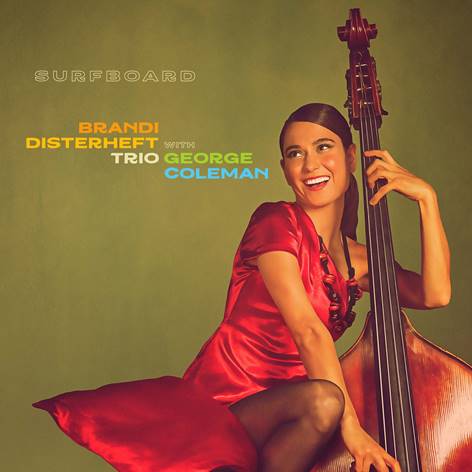 Award-winning Canadian jazz contrabassist, singer and composer Brandi Disterheft and her Trio ride the wave of exploring bossa nova in a contemporary light with the release of her new single and video “Surfboard”.

Watch and listen to “Surfboard” here:

The title track from her forthcoming album, Surfboard — set for release October 2020 via Justin Time Records — the single and its surrounding body of work are touted among Disterheft’s most accomplished yet. Joined by two octogenarian masters — virtuoso tenor saxophonist George Coleman and the definitive Brazilian drummer Portinho — and world-class pianist Klaus Mueller, Disterheft authoritatively and organically guides the flow on a varied program that reflects her capacious interests.

On “Surfboard,” most notably, the artists nothing short of shine with their slick vignette arrangements and fitting homages to composer and co-creator of bossa nova Carlos Jobim, and bassist Sam Jones throughout. Inspired by documentary tandem surfing footage for the video, Portinho shines his signature groove on this pull from the Brazilian Songbook Standards with unrivalled finesse.

Her fifth studio album release, Disterheft’s kinetic, harmonically erudite basslines throughout Surfboard anchor ensemble interpretations of choice tunes culled from the blues, mainstream jazz, and the Great Brazilian and American Songbooks. She sings those Songbook numbers, and her own evocative lyrics, with an instantly recognizable voice that conveys vulnerability and emotional intelligence, and matches the high bar set by her partners on a series of creative solos with deft ease.

For the album’s origins, the project had gestated in Disterheft’s decade-long musical relationship with Portinho, whom she met through Mueller soon after moving to New York from Canada in 2010. Their simpatico developed during years as a working band on numerous Canadian concerts led by Disterheft and Portinho’s five-sets-a-night weekend sinecure at a Brazilian churrascaria in Manhattan.

“I wanted to record us,” she says. “Porto has a way of uplifting the beat. It’s so funky, with such an infectious groove, and he has so much dynamic range.

“He has strict rules,” she continues, “but once you learn them, he wants you to break away. He’s always anticipating, turning around the phrases. It’s so much fun.”

Brandi Disterheft has long-captivated audiences throughout Canada, Europe, Japan, China, and Haiti, — including performing at the coveted Carnegie Hall — with not only her fiery bass playing, but also her innovative live shows as she sings in both English and French showcasing her ambient and dreamy voice.

A featured soloist with the Canada’s Pops Orchestra at just the age of 21, Disterheft began performing in her teens with her mother, a Chicago-born pianist and B3 Organist. Having been under the apprenticeship of Miles Davis’ bassist, Ron Carter, since she relocated to NYC, she has also recorded with icons Oliver Jones and Hank Jones on the album Pleased To Meet You, as well as Benny Green on Anne’s Drummond’s album Revolving, and Cyrus Chestnut and Jeremy Pelt on Vincent Herring’s albums Uptown Shuffle and Night and Day.

Disterheft’s first recording Debut (2008) won a JUNO Award in the Traditional Jazz Album category, and her critically acclaimed Second Side (2009) was picked by The Globe and Mail as one of the ten greatest albums of 2009. Disterheft’s skills as a bassist and composer are clear at every turn on her breathtaking and JUNO Award-nominated follow-ups Gratitude (2012) and Blue Canvas (2016) — the latter featuring an all-star New York City line-up with jazz master Harold Mabern and the great Joe Farnsworth.