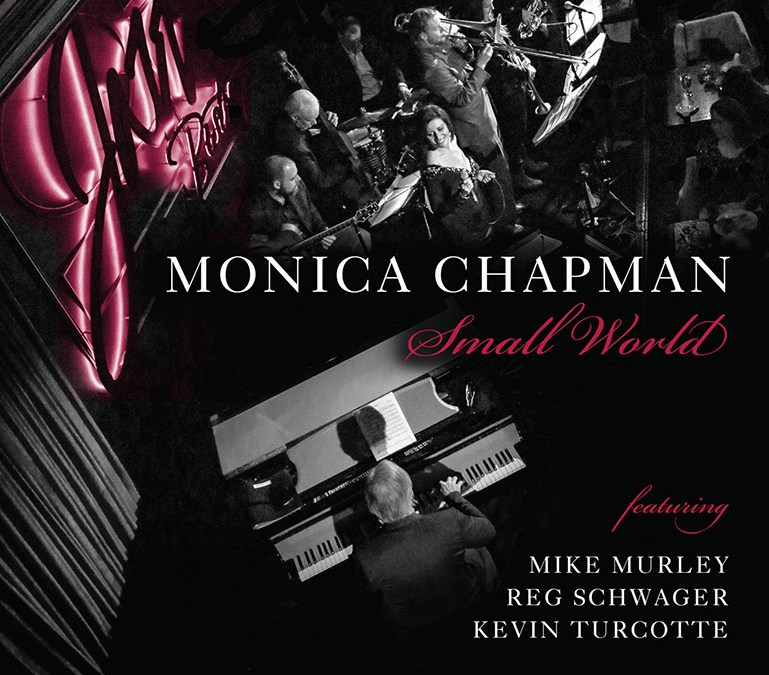 Monica Chapman has a love for the classic movies but it was the musical selections that stole her heart. As a young girl, she watched the movies and Broadway songs captured her.

This is her third CD offering and this one covers a span of over five decades, from the 1930’s, adding jazz classics and For her third album, she has gathered a number of tunes from motion pictures and put her own spin on them. They cover nearly five decades and go as far back as the 1930’s and up to the 1960’s.

With the extremely talented hand of producer/arranger/pianist Bill King and some of the best jazz players on the scene and you have her new CD Small World.  The song choices are exquisite and the production is smooth and tasteful.

The opening track, ‘A Shine on Your Shoes’ takes your right back to the time of Broadway show tunes. The band really cooks on this one and Monica Chapman belts it out with all her heart.

‘Goldfinger’ at the best of times is a tough one to tackle, but the sultry vocal and breathy deliver does this James Bond classic justice. The title track ‘Small World’ encompasses the whole concept of this classic CD, and the production is clear and clean.

The Duke Ellington tune ‘Caravan’ has an interesting arrangement, with driving horns and drums, with a passionate vocal. The holiday classic ‘Baby It’s Cold Outside’ is a sweet duet featuring Mark Kelso and is always great to hear a new version of it.

Classic version of ‘Big Spender’ which became one of the signature theme songs for Marilyn Monroe, while  ‘What Kind of Fool Am I’ from Man of La Mancha (I Don Quixote) is a great choice to put on this recording, and Chapman does a haunting vocal.

Cole Porter’s ‘So In Love ‘ continues on with this concept CD and ‘Orange Coloured Sky’ is one of the strongest songs on the CD, with tons of punches and vocal hits that make it a strong tune.

The bittersweet and haunting Billy Holiday song ‘Don’t Explain’ balances out all the upbeat songs and ‘A Foggy Day’ (in London) shows the playfulness of Chapman in her song choices.

‘Piel Canela’ shows where this singer has her love of the latin rhythms and where I feel she really excels with her love latin.  Definitely one of the best songs on the album. Watch it here.

This is the third CD offering from Monica Chapman, and I wouldn’t call it easy listening – I would call it easy to listen to – a candlelit dinner and a good bottle of wine with Monica singing to you. A perfect choice.