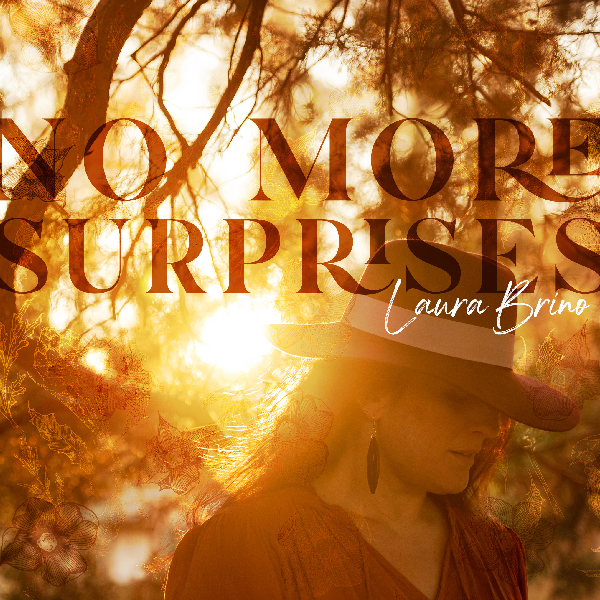 Featuring Americana-roots sensibilities and solid songwriting, folk singer/songwriter Laura Brino returns after a 13-year hiatus with a new album, No More Surprises. Featuring a deep sense of maturity and grounding, it arrives alongside new single, “All I Need” – check it out on YouTube here:

After two years of being isolated, Brino’s new 11-song LP delivers not only the same signature breathy vocals and narrative songwriting as on albums past, but also comfort after time away and of uncertainty.

Supported by a rich array of Americana-inspired instrumentation such as fiddle, mandolin, banjo, and slide guitar, No More Surprises unveils a sentiment Brino is familiar with; having spent her life finding healing through music and art, the Annapolis, Maryland-based artist dedicates her life’s work to provide that same kind of healing to everyone around her.

Since her release of How We Survived back in 2009, Brino went on to release Snowglobe in 2012 under the moniker Lily and the Pearl — a project with her husband and fellow musician, Sean Jackson aka Dracula Jackson.

In the years following, she essentially disappeared from the music scene as she settled into her home life and began a family.

No More Surprises — including “All I Need,” written about her daughters — is a collection of songs that were written over the last ten years. Some fans will recognize a song or two that were in heavy rotation years back when she toured up and down the east coast in Philadelphia, New York, and Boston.

In early 2018, while pregnant with her second child, Brino began recording the release with local musician Ahren Buchheister who, at the time, was working on his own solo album. With a young child and another on the way, they chose to record separately as a way to manage parenthood and their music life. Once recording had started, Brino began bringing session players in to bring her Americana vision to fruition and, having finished recording her guitar and main vocals, she was set to give birth within a few weeks.

After a very traumatic birth that nearly took her and her daughter’s life, Brino struggled with PTSD and nearly stopped playing music altogether. The next year, she poured all of her energy into being a mother and a wife while the album sat on the shelf.

Once the pandemic hit, however, she decided to finish the album any way she could and, over the next two years while in and out of quarantine, Brino worked with Buchheister to lay down tracks and work with session players via Facetime in order to capture the sound she was looking for. She even recorded background vocals from the car while Buchheister ran cables from the studio out to the driver’s seat.

The release of this album symbolizes the end of the way things were and, for Brino, a time to move forward into a more certain future, while also healing from the past.

Written about her daughters, the video for “All I Need” features an array of home movies — including Brino’s own mother shown raising her kids, followed by some of Brino and her own, and closing with a montage of videos of moms and their kids submitted through Brino’s website.

No More Surprises also features the song, “Stay”; co-written with Jackson; the track tackles love in the time of mental health struggles, and the official music video features the duo, shot during isolation, in an atmospheric sepia tone.