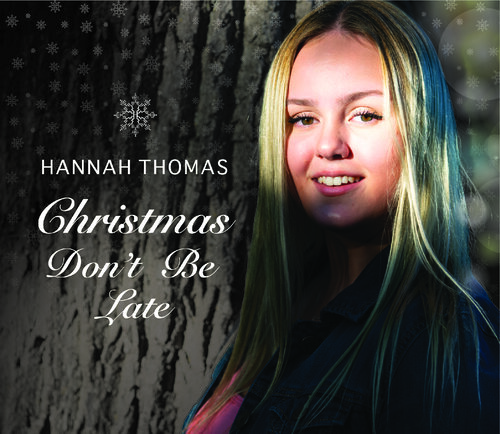 All ready to go and tied up with a bow, award-nominated Canadian artist Hannah Thomas celebrates the season with the release of her stunning holiday album, Christmas Don’t Be Late

Recently nominated for Young Performer of the Year at the Canadian Folk Music Awards, the 18-year-old songstress from Stratford, Ontario harnesses the magic of Christmas by delivering 11 reimagined Christmas tracks that feature her gorgeous vox and ethereal delivery.

Thomas began prepping the album alongside Dayna Manning and Lori Thomas in the early months of 2020. “I love Christmas music,” Thomas says, adding she’d been considering a Christmas album for more than a few years.

The title track of the album, “Christmas Don’t Be Late”, was one of the first songs the trio considered for the project. “I love the song and thought that I could do a really unique version of it,” Thomas explains, adding, “Ben Bolt-Martin was the arranger on this album and he did an outstanding job making all of the songs unique but this arrangement was one of my favourites. It boasts a slow melodic start, then breaks into an uptempo, fast paced, catchy Christmas tune.”

Check out the title track “Christmas Don’t Be Late” here:

The album works flawlessly as the soundtrack of the season with 11 exquisitely recorded takes on seasonal favourites, such as Meghan Trainor’s “I’ll Be Home,” Mariah Carey’s “All I Want For Christmas Is You,” the release’s title track, “Christmas Don’t Be Late,” and more. The release concludes with a heartfelt and inspiring father/daughter duet of “The Prayer,” featuring Hannah’s dad, Dale Thomas.

“We recorded this album in the middle of Covid-19 when rental space and in person contact was limited,” Thomas describes of the studio process. “We were fortunate to find a space in a friend’s former chicken barn just outside of Stratford where we had the proper acoustics and availability to safely distance from one another. It was here that we recorded some of the instruments and really got a feel for what the album would sound like.

“The addition of the odd cricket, which we had to remove from the room, added some humour to our days of recording!” she continues. “We finished recording the album in late Fall of 2020 at The Drive Shed Recording Studio, with John ‘Beetle’ Bailey, in New Hamburg, Ontario.”

Hannah Thomas shines track to track, with an unbelievable talent conveying the message in sweeping runs, powerful belts, and calming reservations in the moments that count the most. Her record provides equally the magic of Christmas, with the mesmerizing showcase of an up and coming starlet.

Before the age of 20, Thomas was already a decorated performer, having earned accolades and accomplishments in her hometown of Stratford, and across the country. Her talent has seen her open for Alan Doyle (Great Big Sea) at Aurora’s Magna Hoedown Showdown in 2019, and granted her opportunities with The Shot Canada, the Stratford Festival of Canada, Stratford Summer Music, working with renowned folk artist Dayna Manning (whom she’d later enlist to produce Christmas Don’t Be Late), and more. One of Thomas’ mega highlights was 2020 and 2021’s “Dock Music” — a Sunday summer concert series at her family’s dock along the Avon River in Stratford where the teen would perform for the community.

And this holiday season, Hannah Thomas has seen yet another dream come true: her incomparable, raw talent is now fully on display within an album of her favourite music.

Christmas Don’t Be Late will be all you want to press play on this year, and it’s available now.