Skip to main content
Vancouver, BC-Based Son of James Doubles Down With “I Need You” & “Have You Been in Love” 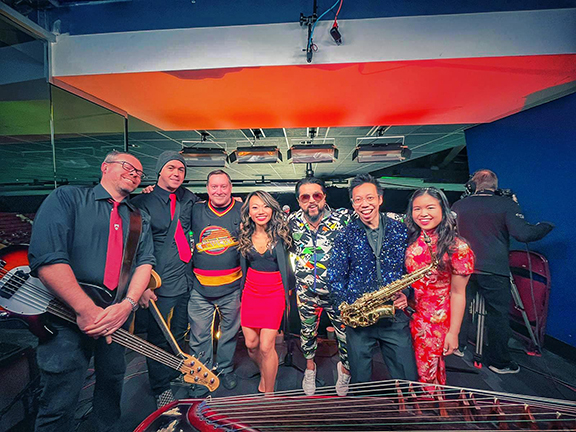 While many romantic relationships have not survived throughout the global pandemic, many have thrived, begging the question of what’s behind love lost and found during this unprecedented time in human history. Vancouver, BC-based rock group Son of James is exploring these two sides of love from a personal perspective with back-to-back singles and videos, “I Need You” and “Have You Been in Love.”

Both “I Need You” and “Have You Been in Love” were borne out of pandemic-inspired introspection and creativity for Son of James’ lead vocalist and songwriter, Shon Wong.

Check out the tunes on YouTube here:
“I Need You”

“Have You Been in Love”

A powerful, emotion-packed ballad a la Mr. Big’s “To Be With You,” “I Need You” is a result of the early days of COVID and the isolation Wong was feeling that bred self-reflection. As a fitness trainer, Wong had been suddenly shut down. Live music and the ability to perform were also off the table. So, he was feeling lonely and uncertain about the future.

“Everyone is keeping their distance; we're at the peak of COVID; nobody is taking any chances,” remembers Wong. “In that stage, I asked myself ‘Shon, why are you alone?’ and at that moment I started to think about past girlfriends and past romances and why it didn't work.

“This song is basically me owning up to it and taking responsibility for what could've been some great relationships.”

Son of James explores a more hopeful side of love and relationships with their second single and video release “Have You Ever Been in Love?” Thinking and chatting with friends about how many relationships have been casualties of the pandemic prompted the question to be asked and gave Wong some introspective food for thought.

“I had to really think about that, and the answer was ‘no,’” Wong recalls. “I'm imagining being in a 10-year relationship and being asked that question, and how awful it would be if the answer was still ‘no.’”

However, “Have You Been in Love” is not so much about the absence of love as it is about the prospect of it. “To remind everyone what love sounds like, ‘Have You Been in Love’ was written with a carefree approach that electrically soars past any boundaries,” explains Wong.  It’s a reminder that keeping six feet apart isn't forever. Don't be afraid to love.”

“Have You Been in Love” intriguingly shifts tempos and gears the same way that the pursuit of love alternates between heart-racing moments and more methodical periods of waiting. Wong shares lead vocals with Jackie Nguyen like a courtship dance built around the lyrics Wong had been hearing in his head for some time after that initial chat with friends about relationships and the pandemic.

The rest of the band wasn’t immediately on board. “To them, I was bringing a demo held together with scotch tape. But once we got Jackie to sing the chorus, people started to see what I was cooking up. Then once we got the pianist, cellist, and synth strings to help disguise the tempo changes, the scotch tape started to turn to glue, and the song started taking shape.”

Much like the two sides of love that the songs reside on, the videos for each have their own distinct moods and directions and both are available now to watch on YouTube.

An empty warehouse with an open staircase is the main location for “I Need You” conveying a broken down, lonely and rundown feeling. “It was perfect!” says Wong. “I thought it would be cool to have different musicians at the top of the stairs while I was singing at the bottom. In editing, we could flicker between different musicians while I sang. To do this, I had to shoot myself performing with each musician individually, so we had consistency.”

The video for “Have You Been in Love” is revved up in more ways than one. Wong and his creative team wanted to echo the song’s classic rock vibe in the video. “I dusted off my Top Gun Jacket, jumped into my red 1985 Honda Prelude, and cruised the streets of Vancouver,” says Wong. “We also incorporated a retro sound wave graphic for the female vocals. The video is intimate, raw, retro, sexy, and fast. All the ingredients of a classic rock love song!”

Son of James, self-described as a “Vancouver Chinatown rock band that blends the soulful sounds of rock and funk with the mystical sounds of Chinese instrumentation”, is proving to be both a cultural and musical force in the Lower Mainland and beyond with their brand of “Chynatruckerfunk”. In addition to hosting gala Chinese New Year’s events since 2018, the band collaborated with the Vancouver Cantonese Opera and Heart of the City Festival to pen and then perform their original hybrid Chinese Rock Opera “Tale of the Eastside Lantern” in front of a sold-out crowd at Vancouver’s CBC Studio 700. The band made the cover of The Georgia Strait for their efforts. Their music has also taken Son of James to stages in San Francisco, Nashville, Memphis, and Europe.

Alongside frontman and key songwriter Shon Wong, Son of James features an interchangeable line up of Michelle Kwan on cello and Guzheng (Chinese Harp), Jonathan Reichart on lead guitar, Adam Richards on guitar, bass, and vocals, Alan Ruiz on bass, Reuben Avery on piano, Jason Overy on drums, Eric Tsang on sax, and the Jackie Nguyen on vocals.

As we move ahead in 2022 with live music returning and venues welcoming guests back to enjoy it, Son of James will take full advantage of the momentum that two new, pandemic-borne singles are bound to provide.