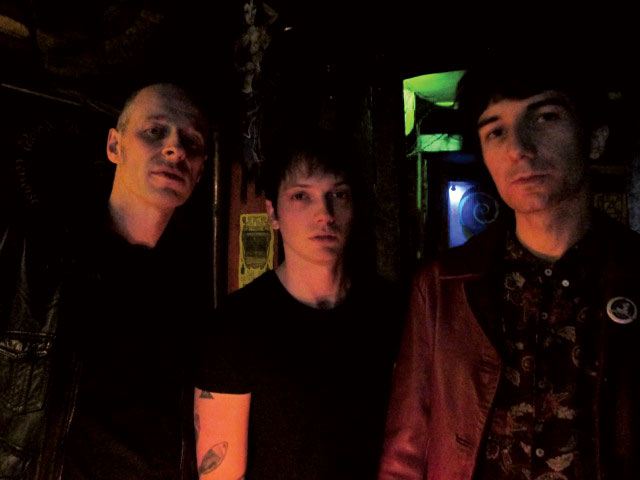 Weird Omen is a garage rock trio from France and on February 1st they will release their infectious 7′′ single “A Place I Want To Know/Girls Are Dancing On The Highway” via Dirty Water Records. The band’s unique sound is bolstered by baritone sax player Fred Rollercoaster, and it features Sister Ray on guitar and Remi Pablo on drums. Look for the 7′′ to come out in anticipation of the band’s upcoming full-length Surrealistic Feast, due out in mid-March via the UK label.

With Fred Rollercoaster’s baritone sax effectively providing the band’s low end, he leads the way on “A Place I Want To Know” cooking the track with a wild-sounding heat. When Sister Ray joins the commotion on guitar, sunny hues of West Coast acid rock blare thru with warped and reverberating tones as Remi Pablo drives the beat like a speed freak on a broken drum kit. It’s a white knuckle ride as the trio gallops along with a slippery rhythmic sense while spastic blasts of strychnine seem to propel them headlong into nervous outbursts of revved-up double time.

The Dirty Water Club started in October 1996 in the Tufnell Park neighbourhood of north London, at a venue called The Boston. The club's name is derived from The Standells' 1966 hit 'Dirty Water' which glorifies the US city of Boston, Massachusetts.

Past performers have included The White Stripes (voted by Q Magazine as one of the top 10 gigs of all time, Mojo one of the top 30 and Kerrang one of the top 100!), The Gories, Country Teasers, Black Lips, NOBUNNY, Kid Congo Powers, The Fleshtones, Billy Childish, Radio Birdman, The Dirtbombs, Thee Michelle Gun Elephant, The 5.6.7.8's, The Horrors and The Brian Jonestown Massacre to name just a few. The club has also seen some original '60s performers, such as The Monks, ? and the Mysterians, Kim Fowley, Sky Saxon, GONN, Michael Davis of the MC5 and more grace its stage.

Their in-house record label, Dirty Water Records, is one of the leading garage/beat/(real) R&B labels in the world.