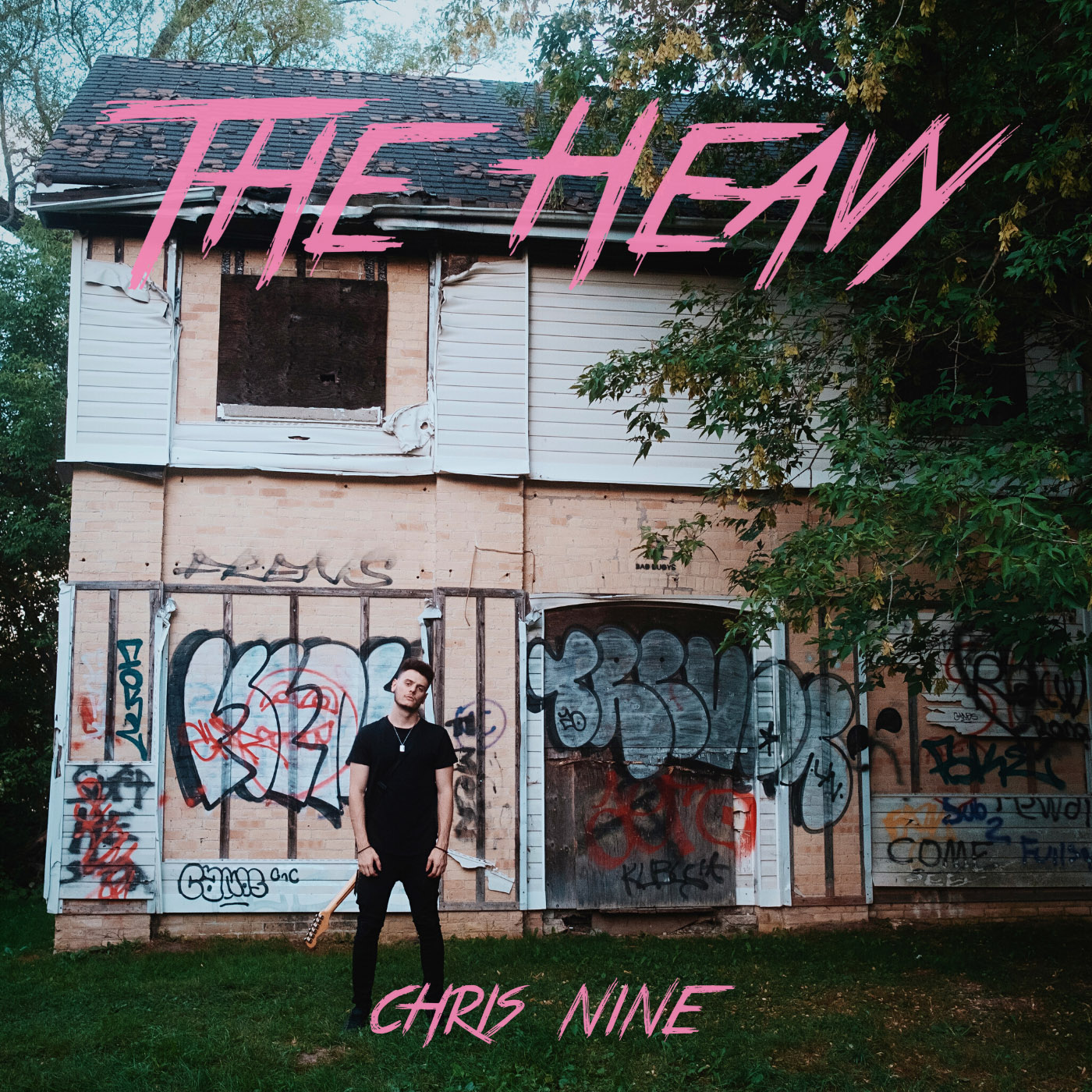 Canadian artist Chris Nine’s recently unleashed EP of adrenaline-inducing post-hardcore punk-pop, the heavy, is proof positive the Toronto-based rocker is a force to be reckoned with all his own.

Featuring “fracture,” “ghosts,” and “the rage,” the blistering trio of tracks serve deeper purpose than an all-out, high-octane sonic sojourn; in fact, they nothing short of extricated the singer/songwriter after a devastating series of events — a concussion, a breakup, a global pandemic, to start.

“The songs on the heavy all resemble the past, present, and future components of dealing with relationships and trauma,” Nine reveals. “I was navigating this mental fog, and confronting shadows of my past. From this, the heavy was summoned; each song sheds light on the different perspectives each version of self brings to the table, and the emotions that follow.”

“This EP was a way of voicing frustration and growing pains in an incredibly cramped space that was the ‘quarantine,’” he continues. “I was lonely after a breakup, after losing friends, and I was feeling brain fog effects from a concussion.

“I felt I needed to become something new, and grow from it. With residual effects from my post-concussion syndrome, my eyesight and sense of self were removed. Ultimately, it forced me to adapt, and to start playing and writing in a different manner.”

One such way was using chord variations due to the decline of muscle memory. Focusing on simple, ‘to the point’ solos, all to avoid getting lost, Nine worked diligently to not only prevent forgetting ideas, but to not to create over-stimulus — which could have potentially worsened his symptoms.

“The first track started at ‘the rage’ and, vocally, something else came out of me,” he recalls of the process. “The harshness and sizzle in my vocals, that usually had to be held back, became paired with this aggressive rock sound my hands now shaped. Grit, and punchy, melodic vocal lines became my style of singing, and I knew I had stumbled onto something and needed to explore this true side of my voice, and myself.”

Nine also found the ongoing pandemic was exacerbating his experience and, after returning from a trip to the grocery store, feeling overwhelmed by the situation and its effect on his life, he experienced a breakthrough. “I came home, quickly grabbed my guitar, and played a riff I had never been able to write a melody line for,” he recalls. “I started to scream the first verse lyrics and, suddenly, a new style of lyric writing had become available to me.”

“fracture” was the first to receive this treatment, with “the rage” and “ghosts” followed soon after. “‘ghosts’ was conceived in the idea of telling a full story, similar to the anime openings that had kept me sane and feeling secure the whole quarantine,” he shares. “Overall, this was the first time I delved into a more compressed tone, and really learned how to excel as a vocalist. Songs became more about melody and tight structure than they ever had before, and attention was paid to performance and emotion over what was ‘correct.’ It allowed me to open my writing to darker conversations, and take risks in my songwriting.”

The searing series of songs serve as a two-way mirror, stripping away ego and pride as he parses pain through earnestly raw and scathingly honest sonic storytelling. From there, a polished orchestration of razor-sharp guitar riffs and stadium-filling drums deliver Chris Nine’s supersonic yet melancholic musical offering.

Getting to that point would prove tricky due to covid-related restrictions; with studios shuttered, Nine soon struggled to find the team to help leverage the release’s maximum potential. “I was previously working with another engineer, but the songs just wouldn’t come together. I knew these songs were destined to be the redefinition of myself, and I made the hard choice to make a change, and reach out to Darren Benner in Alberta.

“He’s a fantastic engineer, and we were on the same wavelength once we met up but, initially, I didn’t know what would come out of it,” Nine continues. “Soon, he sent me his first version of ‘the rage’ and I broke down with relief; I was finally getting somewhere when hope had seemed lost.”

From there, the two would have long chats, some even at 2:00 am, all aimed at injecting a sense of power, simplicity, and unadulterated rock energy into the release. That very presence of power translates to the record’s raison d’être overall, as well; Chris Nine hopes the tracks bring strength to those seemingly broken, seeking new light within the dark.

“Simply, the EP was there to support me,” he reveals. “It was there to give me strength, and make me feel like I could be in the world once more.

“the heavy represents relentless energy, and hopefully teaches people to look inside and dig deep; to never give up, and never back down.”