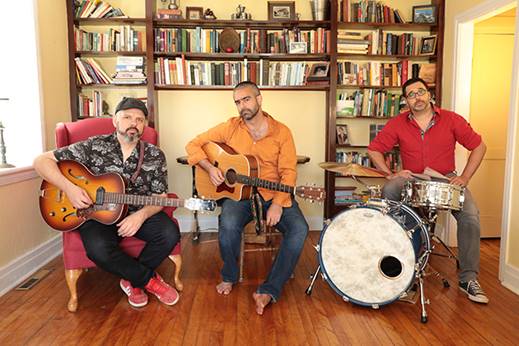 Ottawa, ON-based folk-rock Americana band HemlockHotel are singing of “America” in this, their new single.

Watch and listen to “America” here:

Arriving on the precipice of the trio’s forthcoming self-titled album set for release this October, “America” is about growing up and wondering if you’re bound to repeat the life of your ancestors.

“Some critics wondered why a Canadian band wrote a song that focused on the USA and there are a few reasons,” band member Rod Leggett offers. “Though I was listening to a bunch of protest music, the muse did visit so I listened before she escaped.

“A lot of us want to see political change, but how do you go about that when you no longer have role models? There’s a line in the song about ‘what can be done, of fathers and sons?’; the boy in the song wants a better world, and a country that can stand on its feet, but he’s clearly unsure of himself and what to do.

“There’s no doubt there was a direct focus on the political. I mean, you can’t have it both ways: American art and culture gets exported everywhere and we’re so close to them, so we take a lot in. With adoption comes questions. American politics is in a wild period and it’s sometimes difficult to watch.”

Along with Leggett, band members Dan Leduc and Mark Paré have all been members of respective bands since the 1990s, spanning genres from R&B to jazz to Franco-rock, country rock, and progressive rock in between. In the formation that is HemlockHotel, the three blend their varied and expansive histories to create a new — yet, familiar — sound of which “America” and HemlockHotel serve as a preview to.

“The goal of our first album together was to get comfortable and put together some tunes in the Americana tradition,” Paré says. “I mean, that’s pretty much why we got together; we all like that stuff.”

“We didn’t write a concept album,” Leduc shares of HemlockHotel. “Rather, we wanted to keep the production close enough to what a live performance sounds like; that was our primary goal. Generally, we’re very song-by-song driven,” he continues. “Every song is a microcosm which fits in the given galaxy of the time and place of the recording and the people involved in the production.

“Maybe in a few years we’ll see a more obvious pattern that was at work… Some hidden hand.”