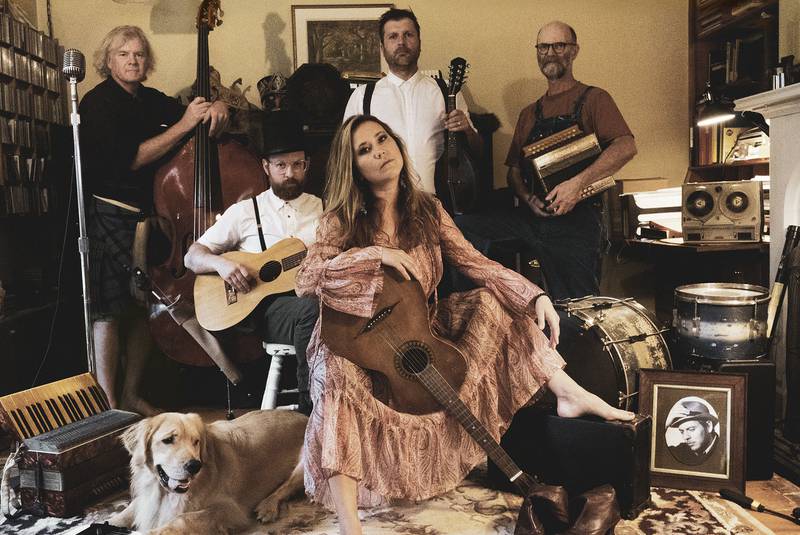 Award-winning Canadian singer/songwriter Jessica Rhaye and The Ramshackle Parade have released their newest single and video, “I Dreamed I Saw St. Augustine” — the latest off 2019’s Just Like A Woman - Songs of Bob Dylan.

And prompt dreams, it does. The video — backlit with star-like twinkle lights, not unlike Rhaye’s own connection to the track — invites viewers into the band’s intimate performance of the 1967 classic. “I’ve always pictured Van Gogh’s ‘Starry Night’ when I listen to this song,” says Rhaye. “Dylan talks about the John Wesley Harding album and, at the time, his increased interests in painting and his work to sharpen the imagery in his lyrics.”

“I think our version helps capture the lyrical imagery of the song.”

“Our version of this classic Dylan tune also takes on more of a ballad feel than the original version,” she continues, considering additional creative differences between the two. “Chris’ beautiful guitar solo — along with the delicate cymbal work and bowed bass — gives our version a very lush and dreamy feel.”

Dale Murray was the producer at the helm, and it was free flow. All band members brought ideas to the floor and imagined working in the style of Dylan in Woodstock, the days of the Basement Tapes and Big Pink, in the wake of the motorcycle crash.

“Dylan always approached production with a minimalist hand,” Rhaye continues. “The real people, the noises of the shirt buttons, chairs scraping the floor — mistakes being made — these were allowed to stay in the final tracks rather than cut out on the editing floor. These features always made his work accessible. You could always tell three were real people somewhere in a room playing these tunes together. That’s what we hope listeners take away from this record.”

Beyond visual, the track holds sentimental value for Rhaye, making it a surefire inclusion on the recent album. “This is the first Bob Dylan song I fell in love with as a kid,” Rhaye confides. “I’d listen to it while lying in the back of my parent’s old station wagon driving to early morning Judo class.”

Just Like A Woman - Songs of Bob Dylan is Rhaye’s sixth full-length release, her second project produced with Dale and the first with the backing of The Ramshackle Parade. “The music from this band flows naturally but is also derelict, delicate, and pure,” says Rhaye of the ensemble that includes a bevy of award-winning and highly accomplished artists in their own right: Chris Braydon, Sandy MacKay, Clinton Charlton, Bill Preeper, and Dale Murray. The band name is “borrowed and bent from a tune on Joe Strummer and the Mescaleros’ Streetcore album.