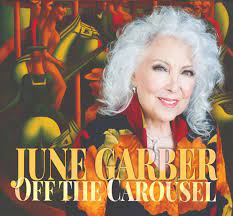 June has chosen material that reflects on her life’s journey thus far. And, as is her way, June has not limited these choices to any one specific genre.  The album highlights June’s oh-so beautiful interpretations of tunes well and lesser-known.

Describing Off the Carousel June Garber says, “Life is a journey… a wild carnival ride. And as the carousel slows… there is so much gratitude for the exhilaration and lessons learned! And so much hope for those whose journey is just beginning.  And remember, as I have… you must understand The Rules of the Road.”

Check out The creation of June Garber's album OFF THE CAROUSEL produced & arranged by Lou Pomanti:

Pre-order link to the album ffm.to/offthecarousel

June’s singing career began shortly after arriving in Canada from her native South Africa in 1975. She first joined a Toronto-based band as a back-up singer and later formed her own 8-piece band, self-producing shows filled with songs she loved – mostly contemporary but also songs from the South African musical, Ipi Tombi. The band enjoyed huge success with long runs in Las Vegas, Atlantic City and Toronto in addition to single concerts across Canada and the U.S.

In the late 1990’s June took a break from constant travel and performing and spent time simply living her life until 2003 which is when her jazz career began and it was no time at all until June Garber won the hearts of Canada’s thriving jazz community.

This concert also features an opening set by a marvelous young jazz singer, Jocelyn Barth who will release her own album on Vesuvius Music this fall.