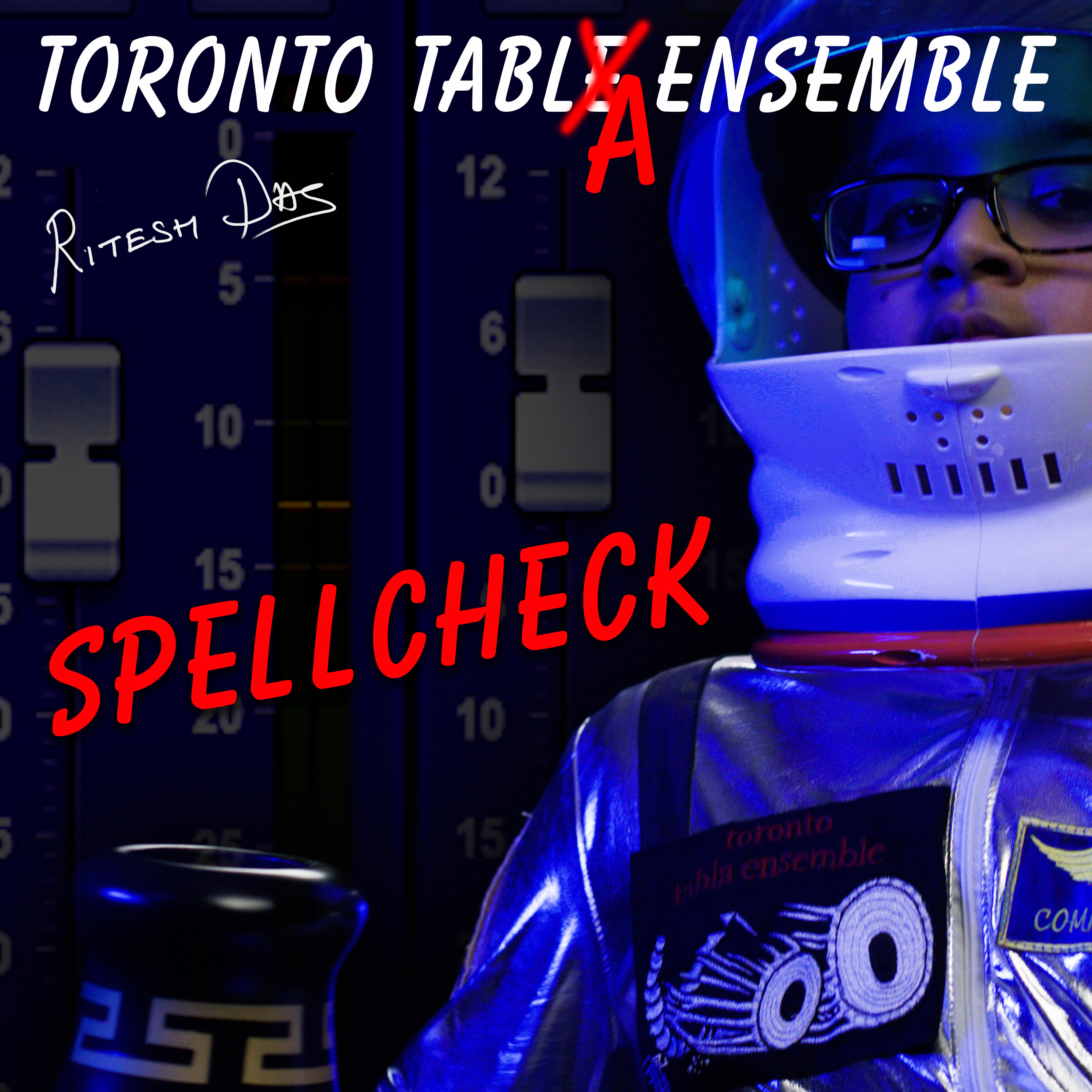 The first release from the group’s upcoming eighth album, For the Love of Tabla, “Spellcheck” gets its name and inspiration from everyone’s favourite, frustrating smart phone feature… Autocorrect.

“The title is a joke,“ Das reveals. “If you try to type out tabla on your phone, spellcheck changes it to table. I get messages all the time from people asking: ‘Where can I buy a new table?’ I tell them to go to a furniture store.”

The composer, educator and virtuoso tabla player also shares that when TTE was nominated for a JUNO, the group’s name was announced as the Toronto Table Ensemble. Who knew that snafu would plant a subliminal creative seed for the ensemble’s latest composition?

Autocorrecting aside, “Spellcheck” reveals that ‘table’ and ‘tabla’ are as complimentary in sound as they are in name. The song combines the spontaneity of table top percussion and a modern drum kit groove with the traditional, North Indian classical art of tabla in an exciting rhythmic mixture.

“I wrote a piece that starts with me playing on a table, like I used to do when I was in school,” Das explains. “Then a drum kit comes in to really kick in the groove, and then the tabla adds sophistication based on that groove. So there are really three elements to the piece: The birth of the rhythm, the groove itself and then the expansion of the rhythm to the highest level.”

“Spellcheck” is truly an all in the tabla family affair. Members of the TTE Youth Ensemble play on the track along with accomplished London, Ontario drummer Dale Anne Brendon, who studies tabla with Das.

The FACTOR-supported video for the spellbinding single recently made its debut with a YouTube premiere; produced and directed by Melissa Das-Arp, it adds a visual layer of artistry to the pulsating instrumental. The clip features Ritesh Das immersed in his own world while recording and mixing, creating an alternate reality with the other players on the track. It’s a world that Das-Arp was already quite familiar with as “Spellcheck” and all the songs for TTE’s new album were written and recorded while the couple has been riding out the COVID pandemic at home.

“Throughout last winter I would hear all kinds of music coming from the basement,” recalls Das-Arp. “There was one piece I heard over and over that caught my ear, a catchy drum pattern that sounded very different and one day I came down to see what that was. It was Ritesh playing on the table.” Das explained to her that he might just add tabla and some other percussion and call it “Spellcheck” in reference to how tabla is always autocorrected to table.

Witnessing how the new album was being recorded remotely with collaborators gave Das-Arp the idea for the video. “I wondered what that experience would feel like, to only work with people online for more than a year, some he had never even met. Who are they really?” she asks. “So I thought of him being in front of his computer mixing these sounds and letting his imagination take over.”

Das-Arp took inspiration from the boundary pushing videos of one of her favourite bands, Outkast, to create a feeling of ‘out of this world’ for the video for “Spellcheck”. She also collaborated with Art Director Manantsoa Razafimandimby to put a retro spin on the costumes to create something you probably would not expect from a Tabla Ensemble video. With COVID restrictions in mind, Das and Das-Arp’s home garage was turned into a film studio and cinematographer Jason Providence and his crew shot each artist in the video separately.