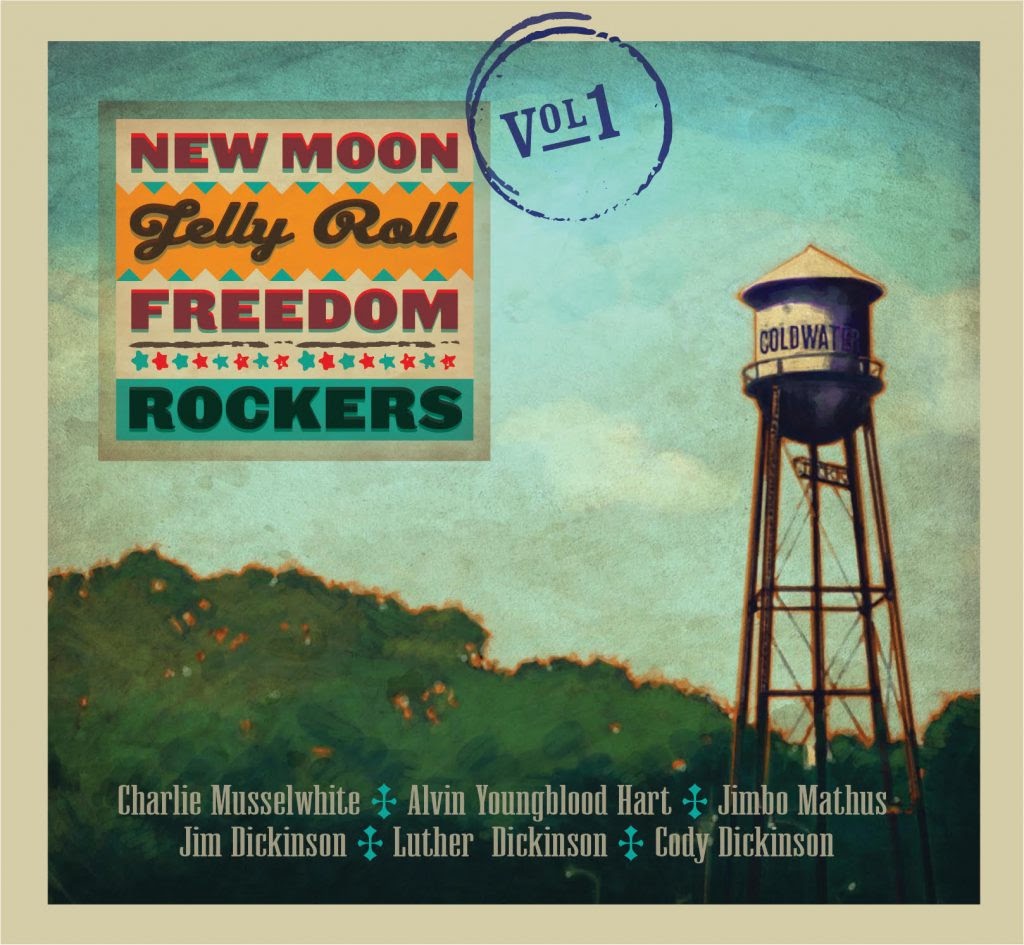 The New Moon Jelly Roll Freedom Rockers originated back in November 2007, when musician brothers Luther and Cody Dickinson sat down for a guitar jam with ex-Squirrel Nut Zippers leader Jimbo Mathus, along with blues greats Charlie Musselwhite, Alvin Youngblood Hart and the late Memphis pianist, producer and all around musical stylist Jim Dickinson, gathered for a roots music extravaganza recording under the group name of the New Moon Jelly Roll Freedom Rockers.

For more than 12 years, that recording’s existence was mentioned only obscurely in interviews, and referenced as a great old-school recording by those few witnesses. It was done “old school” style live off-the- floor over several days, where the musicians all sat in one big circle in the studio and played quietly amongst the microphones, taking turns singing out in the room and improvising on the spot. Since Jim Dickinson’s passing in the summer of 2009, the album just hung out in the archives, waiting. When Stony Plain founder Holger Petersen heard about the sessions this year and expressed his enthusiasm to release it, Luther Dickinson and his partner/engineer Kevin Houston finished the production of the album It is a testament to the great experience and talent of these esteemed performers that they could casually conjure a recording of this quality out of the ether this way, sounding as if the listener is right there in the room with them, with between-song banter and commentary, the classic structures of the blues, being pulled together and teased apart by some of the most award-decorated members of the blues elite. This album crosses the generations of new blues-rockers and classic blues statesmen.

“The New Moon Jelly Roll Freedom Rockers album was conceived in the back of a tour bus,” Luther Dickinson recalls. “Mavis Staples and Charlie Musselwhite had hit the road together, with the North Mississippi Allstars as the house band. The tour forged lifelong friendships and collaborations; it changed our lives in so many ways.

“The package tour was classic showbiz. We’d all been snookered; the tour bus wasn’t what we’d imagined. Instead of rock ‘n’ roll luxury, we found ourselves in hard-cushioned, straight-back retirement home mass transport. The stationary armrests made sleeping futile—so Charlie and I passed the miles shooting the breeze. Charlie made a list of great recordings I should check out, which became a catalyst for our recording session.

“The name of our recording project was born in the back of that ramshackle bus. We had a concept before we had a record. As I explained Alvin Youngblood Hart’s mission to live life as a ‘Freedom Rocker,’ Charlie pointed out the window: there was a new moon that evening. Suddenly, ‘New Moon Freedom Rockers’ materialized. (Dad added ‘Jellyroll’ after the recording session.)

“The Dickinson crew doesn’t enjoy parties, but we dig recording sessions and we love hustling up new recording projects. The New Moon Jelly Roll Freedom Rockers project was one of our ‘potluck’ recording session albums. For potlucks, we invite a cast of characters to the session/party, and ask each player to bring a couple of songs. Musicians take turns leading and accompanying, and before you know it, a record materializes. Dad said misery sticks to the tape. With that in mind, we always strive to have fun in the studio. Making collaborative records with new and old friends is a blast. The NMJRFR session was a love fest. We enjoy music as an artifact of friendship, a by-product of the hang.

“The cast of characters for Charlie Musselwhite’s Mississippi Hill Country homecoming recording session was perfect. We spent the first day recording the live set Charlie had taught the NMA. Then Alvin Youngblood Hart, Jimbo Mathus, and Dad joined the party—each took turns leading us through their pot-luck recording party recipes. The table was set, the feast began, and the session became a festival. The homemade, self-produced recording changed our lives.”

Each of the players in the band has impressive individual resumes, but together they add up to a whole greater than the sum of its parts.

Charlie Musselwhite is a living blues treasure: a Grammy winner, multiple Blues Music Award winner and Memphis Music Hall of Fame inductee. The recording sessions for NMJRFR enabled him to return to his roots. Having spent his childhood in the Mississippi Delta, he then moved to Memphis during the teenage heaven of the rock ‘n’ roll 1950s. In the late ‘50s, Charlie left his mother’s home and moved to Chicago looking for a job, only to find Maxwell Street, Chess Records, and a community of musicians who changed the world forever. In the psychedelic ‘60s he wound up in San Francisco, a “stranger in a strange land,” which he details in one of his featured performances on New Moon Jelly Roll Freedom Rockers Volume 1.

“I made up ‘Strange Land’ when I was eighteen, and had gone to Chicago to find a job,” Musselwhite remembers. “I’d be walking the streets with the classifieds in my hand, filling out job applications and not getting any positive feedback. I didn’t know a soul in Chicago, so as I walked the city, I started making up this song about being a ‘stranger in a strange land.’ I didn’t know there was a book that already had that title. Anyhow, a few years later when I recorded my first album, I put that song on there. I still get requests for it to this day.”

Alvin Youngblood Hart is a Grammy-winning musician who was born in Oakland, California, and spent some time in Carroll County, Mississippi, where he was influenced by the Mississippi country blues performed by his relatives. Hart is known as one of the world's foremost practitioners of country blues. His debut album, Big Mama's Door, came out in 1996. In 2003, Hart's album, Down in the Alley, was nominated for a Grammy Award for Best Traditional Blues Album, and in 2005, he received a Grammy for his contribution to Beautiful Dreamer – The Songs of Stephen Foster.

Hart performed in the 2003 Wim Wenders film, The Soul of a Man, which was featured in Martin Scorsese's PBS-TV series, The Blues. Hart was also featured in the documentary, Last of the Mississippi Jukes. In 2010, he teamed up with friends Jimbo Mathus and Luther Dickinson to form the South Memphis String Band. Their first album, Home Sweet Home, was nominated for Best Acoustic Album at the 2011 Blues Foundation Music Awards. The group released a second album, Old Times There, in early 2012.

Besides his previous work with Alvin Youngblood Hart and Luther Dickinson in the South Memphis String Band, Jimbo Mathus was a founder and leader of the roots-bending Squirrel Nut Zippers, a band formed in 1993 in Chapel Hill, North Carolina, whose music was a fusion of Delta blues, gypsy jazz, 1930s–era swing, klezmer, and other styles. They found commercial success during the swing revival of the late 1990s with their 1996 single "Hell." After a hiatus of several years, the original band members got together in 2007 and toured in the U.S. and Canada.

In 2016, The Squirrel Zippers reunited with a new lineup to tour in support of the 20th anniversary of their highest-selling album, Hot. In addition to his work with the Squirrel Nut Zippers, Jimbo Mathus has recorded and produced a number of lauded solo records.

Jim Dickinson was a Memphis music legend for decades, performing solo as well as with a host of iconic international artists and local “Bluff City” musicians. In the 1950s, he recorded for the iconic Sun Records label in Memphis and later played on sessions at Chips Moman’s American Sound Studios.  By 1966, Dickinson was a record producer at Ardent Studios working with numerous cutting-edge bands.

In the late 1960s, Dickinson joined with fellow Memphis musicians to form the Dixie Flyers, who backed a variety of performers, including Hank Ballard, James Carr and Albert Collins. In 1970, the group began to back many of Atlantic Records’ stable of soul acts under the guidance of famed producer Jerry Wexler. Then based at Criteria Studios in Miami, they recorded on Aretha Franklin’s 1970 hit, “Spirit in the Dark,” and contributed to recordings by Delaney and Bonnie, Jerry Jeff Walker, Ronnie Hawkins, Sam and Dave, Dion, Brook Benton, Lulu, Sam the Sham and Esther Phillips.

Dickinson left the group to pursue a solo career in 1971 and released his first solo album, Dixie Fried, on Atlantic in 1972. In addition to the Carl Perkins title song, the album featured songs by Bob Dylan and Furry Lewis.

In the 1970s, he became known as a producer, recording Big Star’s Third album in 1974, and serving as co-producer with Alex Chilton on Chilton’s 1979 album, Like Flies on Sherbert. He produced recordings for performers as diverse as Willy DeVille, Green on Red, Mojo Nixon, The Replacements, Toots and the Maytals and Screamin’ Jay Hawkins.

As a session musician, he played piano with The Rolling Stones on “Wild Horses” for their historic 1970 Sticky Fingers album, recorded at Muscle Shoals Sound Studio; and through the rest of the century played on nearly a dozen records with Ry Cooder, as well as on Bob Dylan’s 1997 album, Time Out of Mind.

With the North Mississippi Allstars, Jim Dickinson’s sons Luther and Cody have proven that the apple doesn’t fall far from the tree, as they’ve embraced all manner of roots music in recording their own albums, as well as in collaborations with like-minded musicians who embrace the spirit of musical discovery and the sheer enjoyment of playing.

The Allstars' first release, Shake Hands with Shorty, was nominated for a Grammy Award for Best Contemporary Blues Album. Since then, 51 Phantom and Electric Blue Watermelon have received nominations in the same category. The group also won a Blues Music Award for Best New Artist Debut in 2001. Luther Dickinson also has received three Grammy nominations in the Traditional Folk category as a solo artist.

The band has backed and toured with John Hiatt and released an album with him, Master of Disaster, and later teamed up with Robert Randolph and John Medeski to form the Word.

In November 2007, Luther Dickinson joined the Black Crowes as lead guitarist and appeared on their albums Warpaint (2008), Before the Frost...Until the Freeze (2009) and Croweologzy (2010).). Cody Dickinson also started a side project, Hill Country Revue, which released two albums, Make a Move (2009) and Zebra Ranch (2010).

Besides their touring with Mavis Staples and Charlie Mussewhite, the Allstars also opened for Robert Plant and the Band of Joy on their concert tour in 2011 and the Dave Matthews Band in the spring of 2013.

Other North Mississippi Allstars album releases include World Boogie Is Coming in 2013, Freedom & Dreams in 2015, Prayer for Peace in 2017 (which reached number one on the Billboard blues album chart) and most recently Up and Rolling in 2020.