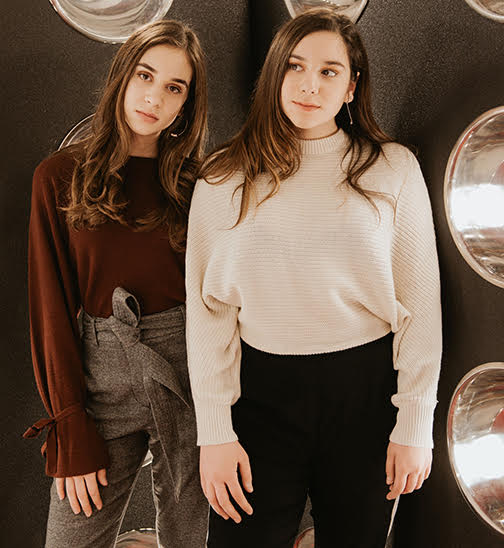 Toronto alt-pop singer/songwriters Caardia caution the dangers of cell phone and social media dependency in their newest single and video, “The Deep End”.

The second single — and the title track — from their critically acclaimed debut EP, The Deep End, sisters Celia and Annie Siriopoulos penned the song with producer Ryan Guay and Erik Van Wissen.

“‘The Deep End’ is about the dependency people have on cell phones in society today,” Celia offers on the song’s origin. “And the false reality they create for themselves,” Annie adds.

For the song, the Siriopoulos sisters were keen to shine a light on the issue by stressing the importance of wrongly-represented realities and false intimacies of relationships — no matter the context — through a screen. The pair spare no allusive punches staking claim to the severity of the situation, playing out real relationships fragmenting and handcuffs attached to cell phones.

“Not only do people depend on social media, but they fall so far into this false reality that they are unable to escape,” Annie continues. “The video is a visual experience symbolizing how lost and vulnerable people become.”

“Mental illness can commonly be a result of this,” Celia considers. “People find themselves in the deep end, following individuals everywhere, leading no escape back to the surface… Back to reality.”

The notions are very much part of the sisters’ cause du Coeur; in the few spare moments not centred on their own music, they are co-founders and co-organizers of Youth Jam TO, an annual music festival in Toronto hosting 2,500+ attendees, as well as were in-demand public speakers with ‘Kill It With Kindness,’ an anti-bullying initiative. In addition, they were recently featured in a book highlighting social activists, called Awaken Your Inner Hero.

For Caardia, they are the recipients of both CBC Searchlight’s Top 50 Judge’s Choice (for the second year in a row) and the York Region Celebration of the Arts Bursary for vocals, have been seen, heard and heralded on CBC, SiriusXM, Global, CJLO, CP24, CTV, Rogers TV, Girls’ World Magazine, and more — as well as Canadian Indie Week and annually at the Distillery District’s Toronto Christmas Market.