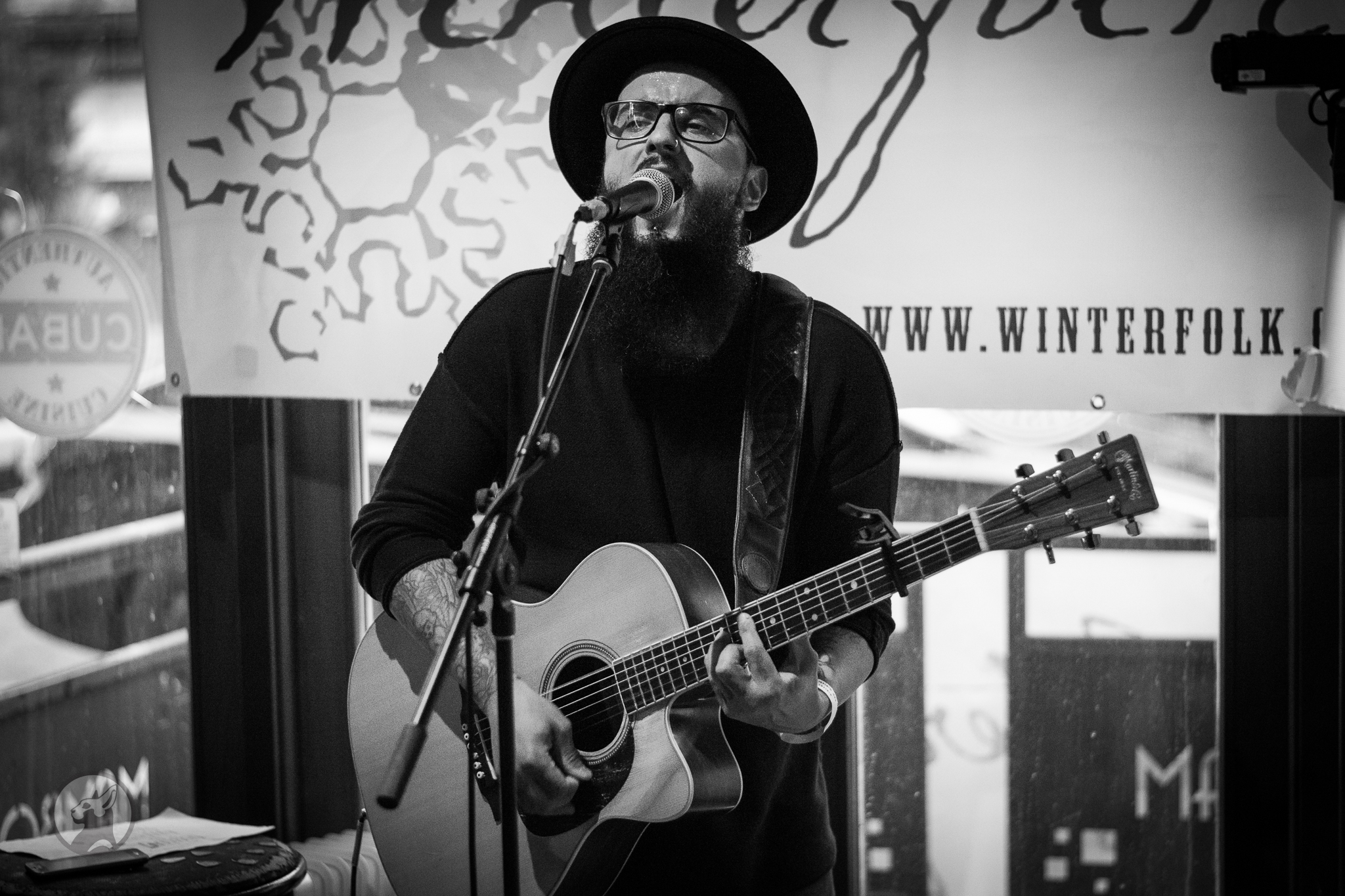 I was staring at the girl who had given me my wrist bands and directed me to a man named Dougall who supplied my drink tickets. She was an eager volunteer who had arrived in Toronto from Kitchener-Waterloo via Kelowna with the intention of climbing the ladder of the music scene in our fine metropolis armed only with a list of every music festival in the coming year that was seeking staff. I was wondering how someone of her background had found her way into this highly local and cloistered scene and then I began sensing that evidence of that chronically under-publicized connection between the DIY punk-rock and folk music scenes in North America. With her half-shaved head, and her tattered black vest I realized that she would not look out of place as a regular at The Arcade, a much-beloved east-side punk house that had supplied me with much of my early interview and music review experience.

At 8:40 PM, pizza was served to the crowd at stage left as Maggie and Mr. Rogers launched into their cover of 'At Last'. At this point, segments of the crowd had begun to filter out of the room, though whether they were exiting to the street or just going upstairs to hear a different selection of live music was not immediately clear. The band departed the stage with a bow and a smile five minutes later and a staff member on the microphone reminded the crowd to keep drinking booze, tip their server and return at 9:30 for the next musical act. I ate several slices of pizza and then went out front to hack a dart as I considered my options for the evening. My photographer's participation felt like a savory, key ingredient to this particular journalistic gumbo. I had always felt that good imagery was necessary for covering any live music experience.

At the Forgotten Rebels show at Lee's Palace (http://cashboxcanada.ca/8025/forgotten-rebels-lees-palace-toronto) I had to make do with my ex-wife's smartphone camera and for the Do Make Say Think show at Lee's Palace I had contracted at the last minute the services of my lifelong friend Ryland Tomlinson who managed to get some truly stunning shots of the Toronto-based prog-rock orchestra before security warned him away from taking photos in the pit.

A group of women who appeared to be close to my age (late 20's) filtered into my section timidly, two of them bearing by far the wildest hair colours in attendance at the festival (pink and green). They ask if the table in front of me was taken and when I said that it was not, they proceeded to occupy the power vacuum left by the departed Lenny Kravitz look-alike who had grooved along to the beat in that same spot, not fifteen minutes beforehand.

The next day I would return to the Danforth to begin covering the festival in earnest with my veteran photographer in tow. By the end we would have decided it was a worthwhile experience, baffled only by the fact that the festival consisted of far more blues-rock than straight up folk acts.

The Jerome Tucker Band indeed has it's musical roots in American blues music and UK based Ska, reggae and rocksteady but tonight they use their powerful crowd appeal to bring a packed house to the 2019 installment of Winterfolk on the Danforth right here in Toronto, Canada.

My photographer walks in front of me, making her way to the front of the stage with thousands of dollars’ worth of camera equipment and I begin praying that she gets some good shots of King Tucker himself and his merry men as the bassist shreds his guitar in a manner reminiscent of the very best of Victor Wooten or Primus. His band manages to keep the energy at peak intensity as the track ends, seguing into stage banter and then launching into an upbeat cover of 'Fly Like an Eagle' (Time Keeps on Slipping). Three out of the four band members are Canadian, I am told, including Carl Harvey who still tours with the legendary Toots and the Maytals.

On saxophone was Rob Christian, a friend of mine from a past life largely spent in the University of Toronto dormitories where Rob would play keyboard for myself and my then-girlfriend. He gave us a quick video interview outside after their set in which he explained how got involved with the band, plug their most recent album Still On Fire and explains his plans for the future, some background on Tucker himself and relates his favourite aspect of Winterfolk.

Canadian bassist Gary Kendall moved to Toronto in 1968 and by 1971 was a fixture at Grossman's Tavern as part of the James Hartley band. The band plays an ear-splittingly loud, soulful blues set and I reflect once again that I have not heard any actual acoustic folk music so far since Maggie and Mr. Rogers at the previous night's opening party. The action was tight but for real it was too loud, I regretted not bringing earplugs for my photographer and for an old friend of mine who I had roped into attending the festivities with me at the last minute. After their set, the three of us departed the Black Swan, making our way to the Cuban sandwich joint Mambo for a performance by...

Simone Morris took the stage at Mambo for an excellent and intimate yet sadly, somewhat more sparsely attended the performance at the Cuban restaurant turned festival venue just as we arrived. She seemed elated as she explained that her most recent album had received extensive play on CBC RADIO ONE on was number 4 on the jazz and community charts. Her first track, “BabyThis Works,” consisted of some of the smoothest, most romantic sounding jazz vocals of the entire festival and was well worth attending. We all believed her as she sang: “Blind shall I be, so long as I've got you...”

Sunday night consisted of performances by twee tongue and cheek folk duo Tragedy Ann, a personal, heartfelt and political performance by Black Suit Devil featuring a song he wrote about North Korea and another by his grandma, an electric blues set by Danny Marks and Mike McKenna and closed with an homage to all the 'gentlemen (and women) of blues by The Guitar Boys of Alderon. I would love to go into detail about all that was seen and heard at these performances but alas I have rambled on long enough and frankly y'all should just go out there and buy their records, watch their YouTube videos, and come out into the snowy streets of Toronto to support live music wherever you may find it.