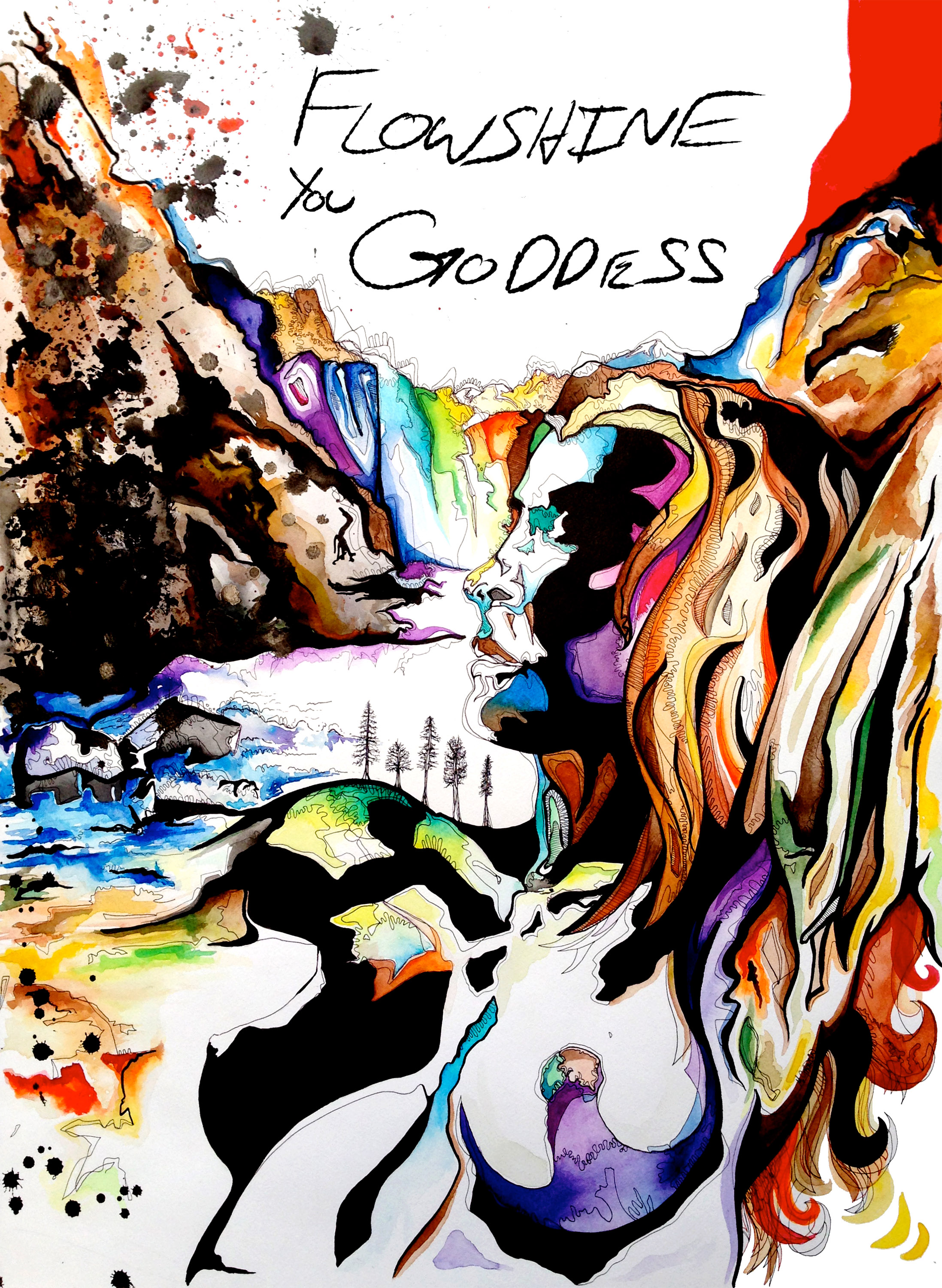 You’ll feel like the Goddess in question when you flow through the latest offering from the West Coast of Canada’s alternative rock five-piece, Flowshine! The epic seven-song strong album, You Goddess — available now alongside new single, “Give It A Go” — is a gorgeous love letter, whimsically written and carved in rock.

Landing a near-exact ten years since Flowshine debuted with their first album, Mountain Queen, You Goddess is their fourth offering. And though the group took a pause on concocting a full-length, their tenacity to consistently deliver on good music, great vibes, and powerful stage performance saw Flowshine spend their time on the road alongside heavy-hitters, Chilliwack, Five Alarm Funk, and The Wooden Sky. Their love of touring even saw them with two stops to the Yukon — a testament to their commitment to taking the music to the fans.

For Jeremiah Erhardt (guitars, vocal), Dallen Muise (bass, vocals), Jeff Oman (percussion), Calen Blondal (percussion), and Erik Smistad (keys, vocals, guitar), You Goddess is a culmination of hard work and consistency given the struggles many bands found while navigating the global pandemic. Remarkably, Flowshine managed to hold off a You Goddess drop and tour, but instead periodically recorded the record in pockets of sessions over two years.

“The sessions for the album were done with producer/engineer Ian Dillon (Buffy Sainte-Marie, Diana Krall) at National Music Centre and Calgary Recording Company,” the band says. The majority of the material was recorded over four weekend sessions — the first taking place in December 2019 and the final in January 2022.

“It’s not necessarily an ideal way to make an album,” explains Erhardt, “but our hand was a little forced in the matter and it literally took us years to finish this record.”

Fans of Flowshine will be doubly excited by the Easter eggs the band plants on the album. Their track “Good People” (a staple in their live set) makes a live-off-the-floor appearance on You Goddess, recorded direct-to-disc as part of an initiative spearheaded by vinyl wizard Ian Dillon. Also featured here is “Shadow In Your Rear View,” a song completely recorded by the band during a home session. The album would go on to be mixed and mastered by Stuart McKillop (Rain City Recorders).

In addition to the intricately written, and dreamscape narrative of the album as a whole, Flowshine plucked the talents of their Calgary music scene comrades for a variety of cameos. Nikki Romeril (violin), Aislinn Grant (vocals), and the legendary Mike Clark (saxophone) were solicited to make appearances on You Goddess, further rounding out Flowshine’s sonic resume. “I’m overjoyed that we were able to have so many of our friends from the Calgary music scene contribute their voices and musicianship to this record, it really gives it some flavour,” says Oman. Further guests include Madisen Muise (vocals), Keath Mueller (trumpet, tuba), Kris Whiteway (vocals), and Tim Korthuis (keys).

You Goddess spins like sonic gold; a novel written in delicate chapters. From the riveting dare of “Give It A Go,” to the bittersweet “Magic On A Mountain,” to concluding with the fan-favourite “Good People,” Flowshine’s You Goddess is a comprehensive think piece that beckons you to press play and not look back.

Whether washed down with a tumbler, or cranked to eleven, Flowshine deliver on providing an album that can do it all — invigorate, captivate, and satiate the listener looking for their next favourite record. You Goddess is the gift that continues to give.