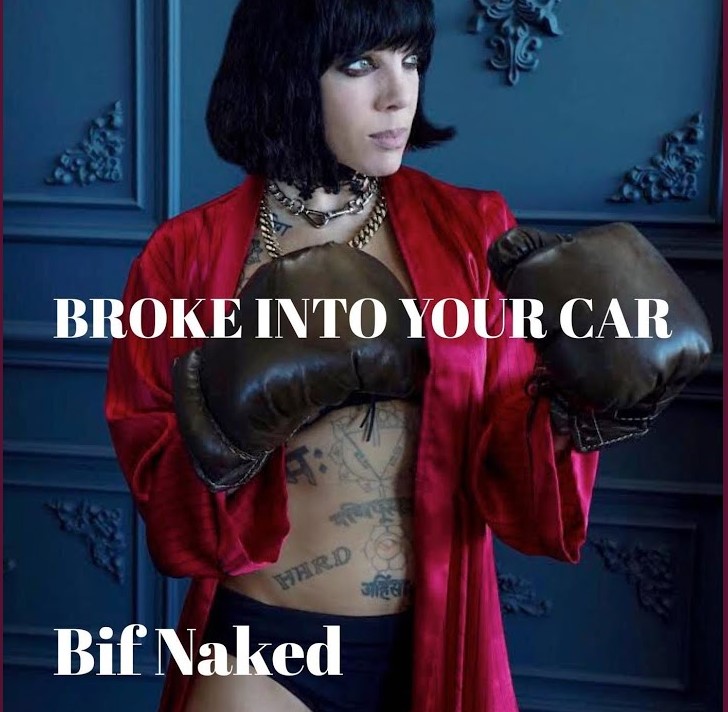 “This is a love song, even though it makes reference to a felony or mischief,” multi-Gold and Platinum-selling Canadian rock star, author, songwriter, manager, producer, human and animal rights activist Bif Naked says of her new single, “Broke into Your Car” — Watch and listen to it here on YouTube:

“Whoopsie!” she continues. “But yes, it really is a nod to the lengths a smitten person — in this case, moi — would go to to gain the attention and affection of their crush.

“I love the imagery of sitting in the back of one’s love interest’s car, perhaps leaving Polaroid pictures (among other things) behind…

“The height of romance!”

The song follows 2020’s release of “JIM,” and a year of continued immersion in the community as a prominent activist. “Originally I considered releasing this track last Spring,” Bif recalls, “but with the ongoing pandemic, it seemed unimportant to me.

“As the summer went along and all of the social unrest and racial awakening that was beginning to really make change, my focus became less about my new album and more about being in the community.

“That has not changed.

“Eventually, we had scheduled a live performance December 30th that was postponed due to a new lockdown to try and curb rising COVID-19 numbers. This song was set to be a surprise during that performance, but I decided to release it now anyway and share some joy.”

Both “Broke into Your Car” and “JIM” serve as prime preview into Bif’s forthcoming full-length offering, CHAMPION.

Her eleventh studio release, the album wastes no time revealing Canada’s ‘Princess of Everything’ remains in her rightful throne, reigning rock supreme and as strong as ever.

“When writing new songs for CHAMPION, I always try to meet every song where it is, both in style and vibe,” she shares. “‘I Broke Into Your Car Last Night’ is definitely a departure from the rock songs on the rest of the record, but love the chance to do lots of different things on each release, and CHAMPION is no different.”

As a title for Bif, CHAMPION couldn’t be more fitting for arguably one of the nation’s most recognized and beloved entertainment industry icons whose personal story provides endless inspiration.

As detailed in her highly intimate, Internationally best-selling memoir, I Bificus (Harper Collins International), the multi-disciplinary artist and businesswoman — and notably, a vegan who lives a straight-edge lifestyle — has arm-wrestled breast cancer, heart surgery, and kidney failure. Inspired by her myriad of life experiences and ardent interest in wellness, she has recently launched MonaLisa Healing, a premium, organic all-hemp CBD online boutique available in Canada, the United States, and soon to the United Kingdom, Europe, Australia, and New Zealand.

And it’s not as if she’s not busy elsewhere; a contributor to such national publications as the Globe and Mail and Huffington Post — and as seen on shows such as Buffy the Vampire Slayer and The Tonight Show with Jay Leno — Bif is fresh off a series of talks at Vancouver’s The Wellness Show.

A podcast series, New Riot Girls, a book of poetry and illustrations, and a book designed to help empower patients and their families while navigating cancer treatments and the Canadian healthcare system are also in the works.

“Broke into Your Car” and CHAMPION are no different.

“I’m still fighting,” she says of the album, and career at large. “I’m still swinging as a legacy artist… An O.G.

“At this stage of the game, I am a CHAMPION.