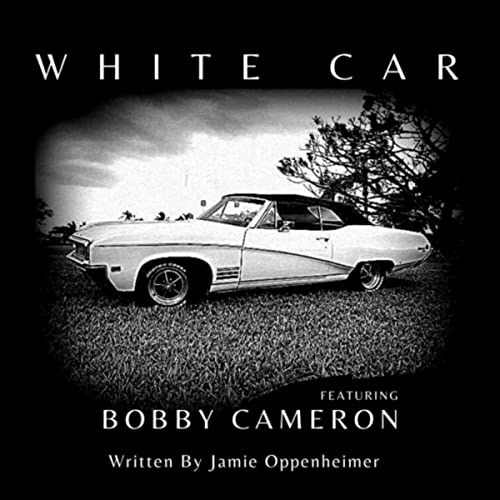 Performed by Bobby Cameron and written by Jamie Oppenheimer, “White Car” is an auditory road trip and you’re invited along for the ride!

The song is what Oppenheimer refers to as in-part autobiographical; inspired by the first car he ever drove, he says this track represents the freedom and escape of getting behind the wheel of his mother’s 1968 Buick Skylark convertible

Ignition turned, and brakes released; in one spin of the track, you’re transported to the open highway, Wayfarers blocking out the sun, and the music washing you down the road.

“Generally, I gave Bobby the freedom to interpret the songs as he saw fit, and I think he did a great job,” Oppenheimer says. “As the album Songs From Room 421 evolved, we both knew that, as musicians and songwriters, we were going to be as proud of the work in 10 years as we are now.”

Oppenheimer reveals “I have been writing songs since the late 80s, but after five years of failed efforts to interest others in my music, I finally took the hint. I never quit writing songs, I just did it for my own enjoyment, and I concentrated on my day job. Now, 30 years later, having retired and moved to Katrine, Ontario, where my wife and I built a log home on the site of the old family cottage, I have resurrected that passion.”

While Oppenheimer spent his formative years working as an industrial real estate broker, retirement has provided him the opportunity to put pen to paper and let the lyrics flow out of him. Bobby Cameron has been a mainstay in Canada’s music landscape, gaining notoriety and recognition after winning the MuchMusic’s Guitar Warz competition in 1990. That win gave this East Coast musician the opportunity to take the stage alongside the great Jeff Healey, and led to his eponymous first release in 1994. A heavily decorated musician, he has lent his talent to collaborations with Luke McMaster (Rihanna, Nick Lachey), Stan Meisnner (Celine Dion, Starship), Long John Baldry, and many others. He’d scoop the JUNO alongside co-writers Jully Black and Keith Harris (Black-Eyed Peas) for Black’s album Reunion.

Released in December 2021, the track reflects the power of a strong song performed by an outstanding musician and producer. The acoustic-heavy, roots/country upbeat diddy speaks to the truth of leaving it all in the rearview. Oppenheimer’s lyrics cover the universal theme of wanderlust, a story of allowing yourself the opportunity to drop down the convertible top and head out to where the road takes you. Cameron’s delivery is honky-tonk roadhouse; his commitment to remaining authentic to the spirit of the song brings the package to life.

Suddenly, it’s summertime. And as the wheels roll, the windows roll down, and the landscape rolls past you, you’ve found the perfect soundtrack to a destination unknown.