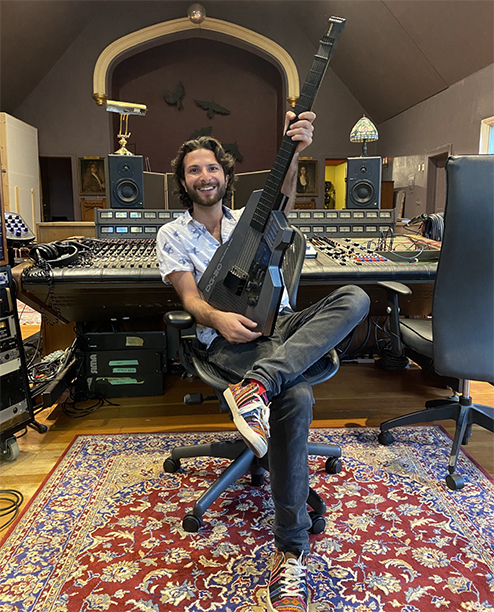 An ethereal guitar-driven track invoking the cadence of jam-band music, “Donnie Green” and the rest of the seven-track LP features skillfully crafted arrangements throughout every moment of this monumental sonic effort. With Stu revealing that each track takes on a life of its own — ”Some are funky, some are real funky, some are groovy…” — the breadth of instrumentation is only matched by the assembled musical forces that helped realize Weinberg’s vision.

While no stranger to the board, Weinberg’s meticulous attention to detail isn’t limited to the studio: the decision to have Disco Stu Likes Disco Music mixed by JUNO Award-winning engineer Kevin Dietz (Glorious Sons, JJ Wilde, Portugal The Man), mastered by Noah Mintz (Arkells, The National, Broken Social Scene), and feature otherworldly, psychedelic artwork by artist Leesa Westwood meant the crisp sound and visual accompaniment of every melodic effort orbits cleanly in this fervent labour of love.

Stu Weinberg started his professional recording career while in university, finding ample opportunity in a Manhattan recording studio during the summer break. He has since performed with countless Billboard-charting and JUNO-nominated artists, with credits on hundreds of songs and playing legendary venues like Massey Hall, Boots & Hearts, and more.

Disco Stu Likes Disco Music began as Weinberg’s personal answer to the pandemic blues, and the massive shift in pace from what the active artist — and the veritable who’s who of the jam-band scene joining him — were used to pre-Covid.

“As a session musician, that seemingly never-ending schedule of tracking on records, traveling for tours, and learning material for gigs leaves little time to focus on your own musical projects,” he shares. “When I found myself stuck in my apartment with nothing but guitars and time, I looked at the blank calendar and knew: there would never be a situation like this again and, if I wanted to create music of my own, I’d have to jump at the opportunity.

“At the onset, the goal was to make music that I dug. When I first started out playing guitar, I was drawn to the classic instrumental guitar records but, as I evolved as a player, the songs take their inspiration from the jam-band scene.

“I love the freedom of jam-band music,” he continues. “It’s very much a guitar-based record, but it steers away from the technical playing with more of an emphasis on the melody and emotion of the song. It combines all the styles of playing that I’ve grown to love, and basically hits all the notes I’m not allowed to play on other artists’ records.”

Hear just what that is on the sonic sojourn that is Disco Stu Likes Disco Music.