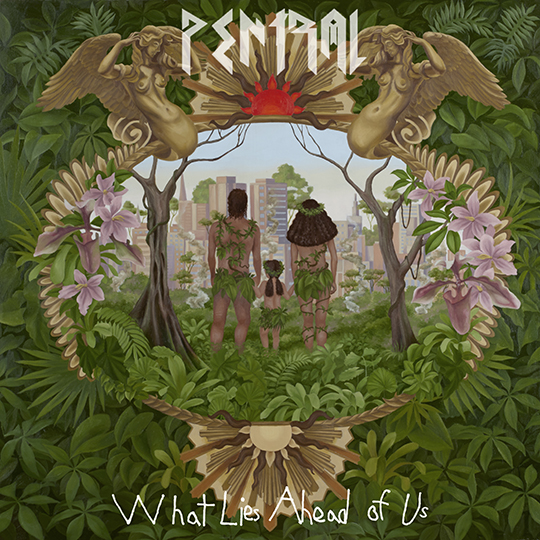 The song — which features a radio edit and a seven-minute extended cut — lands ahead of their forthcoming debut album, What Lies Ahead of Us, set for release this May.

Pentral translates to ‘spirit’ in Latin and, according to the band, was chosen to help signal the premise of the message contained within their sound: the overall need to transcend the “material world” through the power of music — without losing connection with reality and human frailties.

With over 440,000+ streams across platforms and rising, the breakthrough three-piece act consists of bassist Joe Ferry, and brothers — drummer Vagner Lima and lead vocalist, guitarist and songwriter Victor Lima.

As the mastermind behind the music, Victor describes “Silent Trees” and the album, What Lies Ahead of Us, in completion as a “declaration,” which was conceived long before the ongoing COVID-19 pandemic swept the world off its feet.

The narrative of the record in its entirety follows the story of a man and a woman who endure trauma and turmoil before they are gifted with a child — and “Silent Trees” serves as the beginning of the tale.

“The couple lives in the woods and gives birth to a child among the threat of ‘the beast’ — which is pretty much the human being itself — interested in destroying the rainforest, and making money,” Victor shares. “The woman has premonitions about a sad ending and, eventually, they have to run to survive as the invaders arrive.

“It fits the current reality we’re going through,” he continues. “This pandemic is the outcome of the unfriendly way we’ve been treating our environment — and ourselves, as well — and it serves to expose our insensitivity, our lack of empathy [to the world].”

The album art for What Lies Ahead of Us was created by the great Canadian artist Heidi Teillefer, and is described by Pentral as a visual representation of each one of the album’s 10 songs.

Pentral have been gathering a worldwide audience as a result of their original music, plus their modern take on various classic rock songs via their burgeoning YouTube channel; covers of Led Zeppelin’s “Kashmir,” Queen’s “Who Wants to Live Forever,” and The Beatles’ 1967 classic “A Day in the Life” pepper their platform as the band credits them as some of their biggest shared influences. Pentral’s highly-anticipated debut album What Lies Ahead of Us will be available May 7th, 2021 through all major streaming platforms.