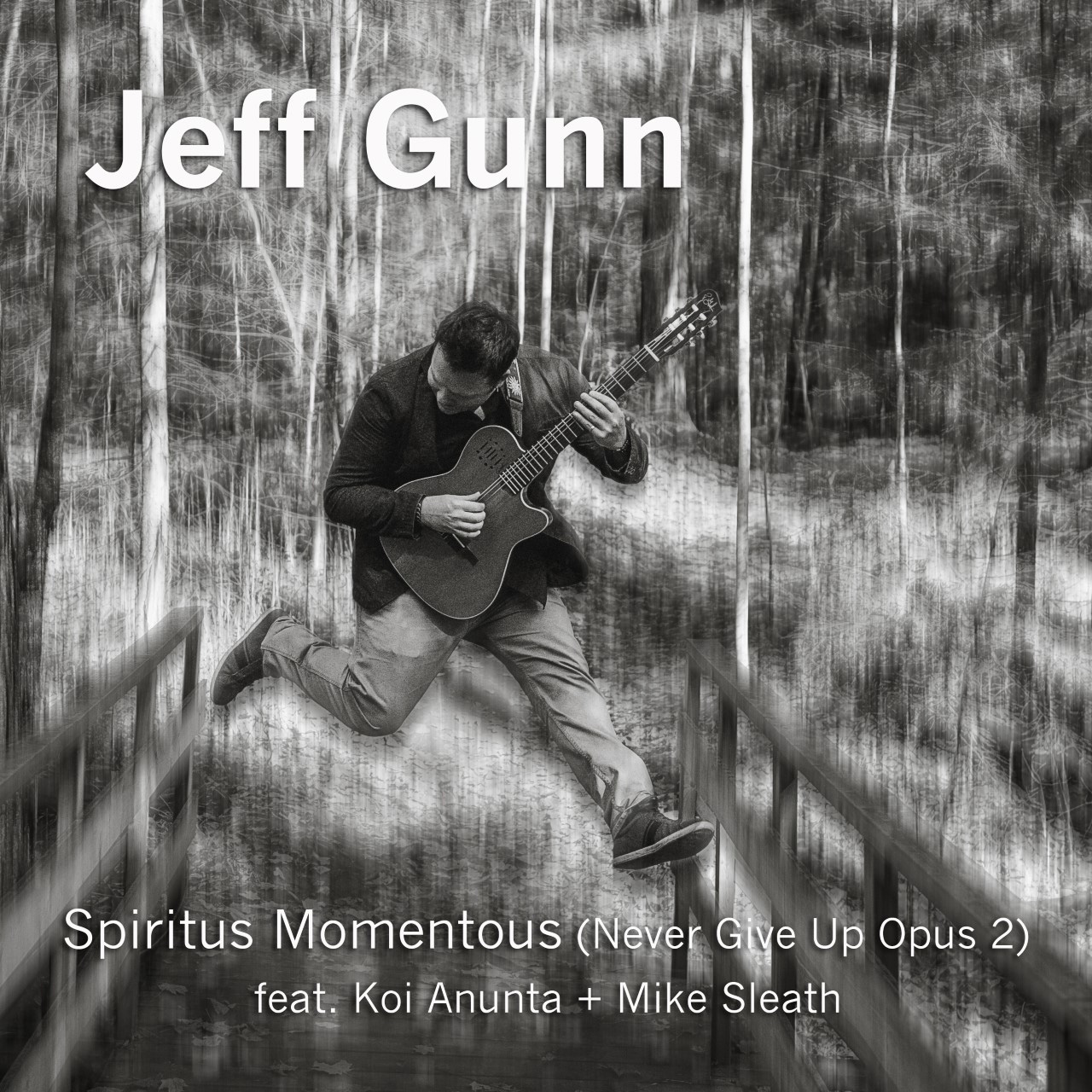 With decades of musical expertise and an unparalleled repertoire, Canadian master-guitarist and songwriter Jeff Gunn keeps your toes tapping with his new single and video, “Spiritus Momentus (Never Give Up Opus 2)” – watch it here:

Firmly footed on Gunn’s signature percussive rhythms and harmonic melodies, the song shines as the debut single off his forthcoming new album, Momentum — slated to arrive in Spring 2022.

The spirited song is a dazzling composition featuring the rhythmic stylings of renowned drummer and percussionist Mike Sleath (Shawn Mendes), who brings his chops to the Peruvian box-shaped instrument called the Cajón, as well as the the stringed sorcery of Koi Anunta (Glass Tiger, Adam Lambert), who enraptures listeners with her sensational guitar and violin work.

Drawing on Jeff Gunn’s uplifting sonic instrumentation, “Spiritus Momentus (Never Give Up Opus 2)” is a song meant to take the listener on a musical journey that’s brimming with joy and positivity; its beautifully-shot music video communicates the song’s radiant energy, with Gunn and Anunta showcasing their talent across sun-soaked beaches and the rolling Hollywood Hills.

“‘Spiritus Momentous’ — and the album as a whole — are a journey that reveals the power, beauty, and versatility of the guitar,” Gunn shares. “At its heart is sonic storytelling, and finding inspiration in challenging times…”

An album rich with melodic spirit, Gunn’s highly-anticipated new release, Momentum, endeavours to help clear away dark clouds in people’s lives when it releases next year. Beyond such sentiment, every aspect of Gunn’s artistic vision has been meticulously formulated to defy genre conventions, and elevate what we think of as guitar-driven music.

The versatility of the project is the result of its all-star cast of accomplished musicians and distinct instrumental choices. Co-produced by award-winning guitar maestro Antoine Dufour, who assists Gunn in constructing a vibrant record that appeals to musicians and music fans alike, the harmonic range of Momentum is further explored through musical appearances by saxophonist Dennis Passley (Northern Soul Horns, Arkells), and flutist Rob Christian (Kush, Sugar Devils). This collection of immensely talented artists apply their skill sets to an already full-bodied album.

But it all centers back to Jeff Gunn, a multi-talented artist with a musical journey akin to a long and winding road — illustrated by his performances at some of the most prestigious venues in the world, and credits alongside some of the greatest recording artists of our time. He was nominated for a JUNO Award for his guitar and production work on Emmanuel Jal’s album, The Key, alongside co-writing credits with Nelly Furtado. On top of these career highlights, the long list of notable artists he’s had the pleasure of recording with includes Domanique Grant, Mark Pellizzer, Kae Sun, and more.