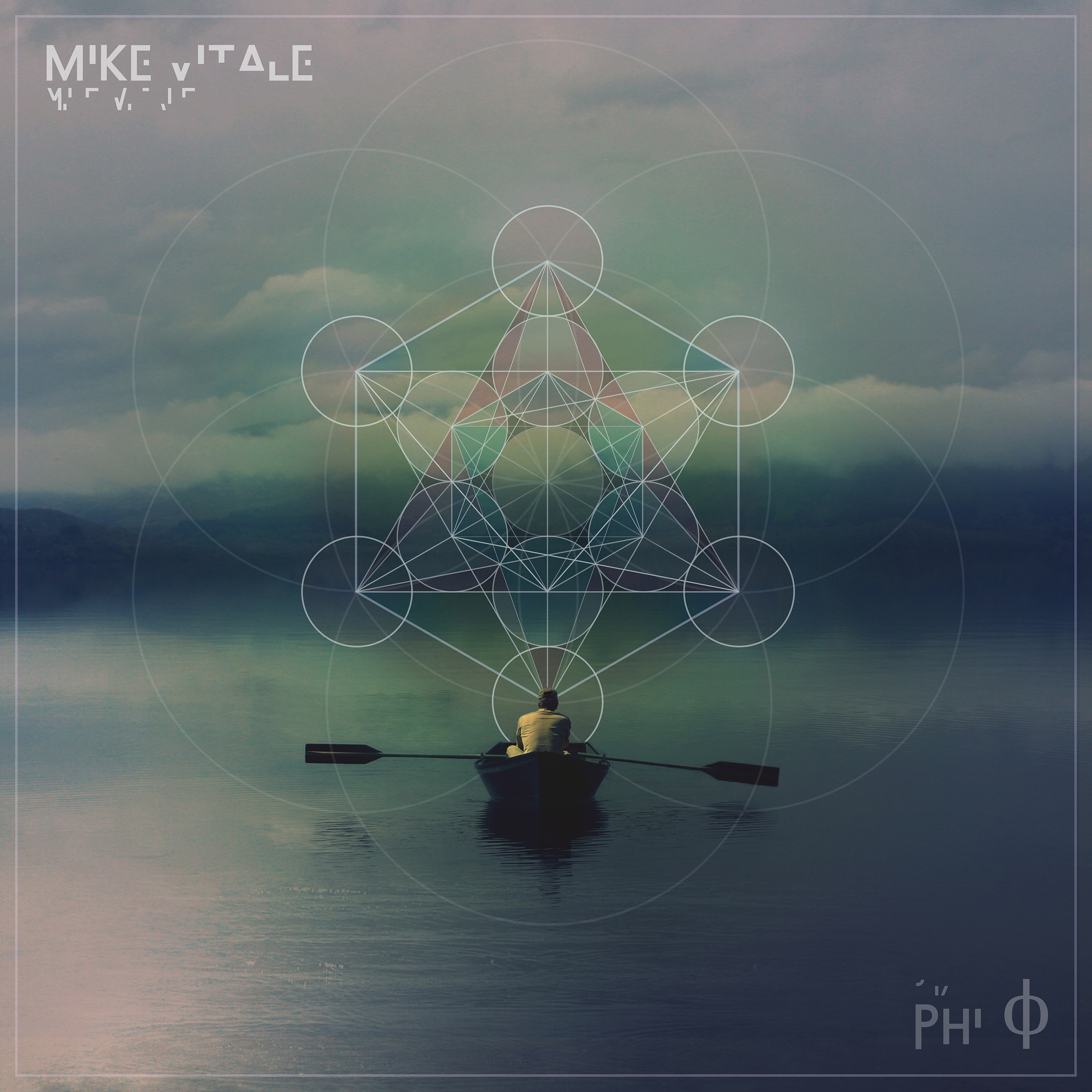 When it comes to the album, you don’t have to try and say ϕ, you just need to listen to it. In case you’re wondering, though, it means “Phi” — and it’s a beautiful lullaby that leaves you lingering on each hook.

It’s an LP the roots indie musician from LA has been in the process of creating for nearly a decade; a labour of love that began four years ago in Long Beach, Vitale fuses heart and love and musings on a 12-track full-length that finds him yodeling, to enchanting us with wanderlust — inviting us to spin starry circles in lovers lengths.

“The album is called PHI as this is the Greek letter representing the Golden Ratio,” Vitale explains. “It is an irrational number that goes on forever, just like Pi.

“But Pi deals with the circumference of circles,” he continues, “whereas Phi deals with spirals, and can be found in much of life we see around us. The way leaves organize the spread of their leaves for maximum sunlight to accomplish photosynthesis, for example, or the layout of a pinecone or a pineapple, which are also spirals, if you look closely. The Fibonacci sequence is directly related to Phi, as well as platonic solids.

“It is a mystery, written in math, and I adore concepts such as this.”

ϕ follows Mike Vitale’s first full-length acoustic, Idiosyncrasies, which dropped in 2007, and his six-track self-titled album — the latter featuring a full band in 2012 and Vitale taking the show on the road along the West Coast, playing wineries, venues, bars, and colleges. Vitale says the album began from a love story and grew into a collection of chapters of life teachings. While he pursued an Americana vibe on the album, truth be told, he fell in love with simply songwriting and putting out an album that didn’t specify a certain genre.

Self-produced, Vitale’s fingers touched every inch of the songs that wrapped ϕ into the collective it became. “I’ve been teaching myself how to produce music for the past 10 or 12 years,” he explains. “I studied music theory and composition in college, so I am an astute student of music and instrumentation.

“I also have many talented friends who played on this album,” he continues. “And, as a friend of mine said, ‘your songs are only as good as the people playing on them,’ which I believe to be true; I feel that a good producer tries to utilize their strengths in order to highlight the song. The song is king.”

One such example is “Home.” An alternative roots ditty with a subsequent music video that hears Vitale promising, offering, and providing, the song finds our protagonist prepared to be there for ‘her.’

“Somewhat embarrassingly, or probably more accurately, just in time, I wrote the chorus of this song well over ten years ago,” Vitale explains. “However, that is where the song stopped.

“For the life of me, I had nothing more to provide to the contents of its possession,” he continues. “It had no walls, or interior in which to stretch one’s legs, or to relax comfortably on the couch and admire its inner being. It had no kitchen to create soul food. It had no bedroom to make love, and to rest a weary head — let alone two — and so it sat in my creative nexus, forgotten and alone, looking for a mate… No verses. No Pre-chorus. No body. No arms or hands to softly caress the listener. No legs to dance on.”

Even after changing his surroundings, moving from Fullerton, to Anaheim, to Long Beach, he reveals. “Nothing,” he says. “Finally, I moved to Los Angeles, and met a girl who became its muse. She provided inspiration that manifested several verses, and the verses reverberated — not off walls, or roof, or floor, but off of a person.

“People; they are home — more so than any bed in a room, in a floor plan, in a wooden house, on a block, in a neighborhood, in a town or city — could ever be.”

The subsequent music video for “Home” was directed and edited by Vitale, as well; he taught himself how to video edit by watching instructional Youtube videos during the COVID-19 pandemic. “It became an exercise in seeing if I could tell a story with a small amount of footage,” he says. “I had approximately 1.5 minutes worth. Could I make a four-minute music video out of such little footage? I tried my best.”

Beyond the welcome mat of “Home,” each song on ϕ has its own specific story — bookended by these two in particular: “Kathy’s Song,” a love letter to a friend’s mother who lost her battle to ALS, and “Younger Days,” what Vitale refers to as ‘a love letter’ to his life.

“It’s to my friends I have made throughout the years that lead parallel lives to my own,” he shares. “We grow together — yet, sometimes we also grow apart — and our perpendicular intersections of life experience are special. However, nothing is more sacred than the present moment. Now is when we choose to be the best version of ourselves.”

From there, “Time Machine” triumphantly proclaims that we are travelers through time and space, fragile in our bodies, and strong in our ability to move freely within our own memories and to create and abstract our own future, while tracks “Empty Circle,” “No Vacancy,” and “Gone” all ruminate on the loss of love and confidence at the hands of an aborted relationship.

Also featured is “Running Away From Home,” an anecdote of a second grade Vitale, running away from home to become a Werewolf like his hero, Michael J. Fox in Teen Wolf. The song was originally released in 2015, exclusively on Bandcamp, with proceeds donated to Michael J. Fox Parkinson's Research Foundation as a one-year-long campaign to raise money for Parkinson's Research.

Despite the setback in sheer length of time the album took from start to completion, what Vitale provides is an entire book-ended storyboard of life experiences, mashed over beautiful melodies and cozy harmonies. From adorable yodels, to asking life’s most perilous questions and seeking answers, Mike Vitale invites us to push play on an album that lands like a gentle hug to each of us, simply chronicling the simplicity of life.

And it really can be as simple as ϕ.