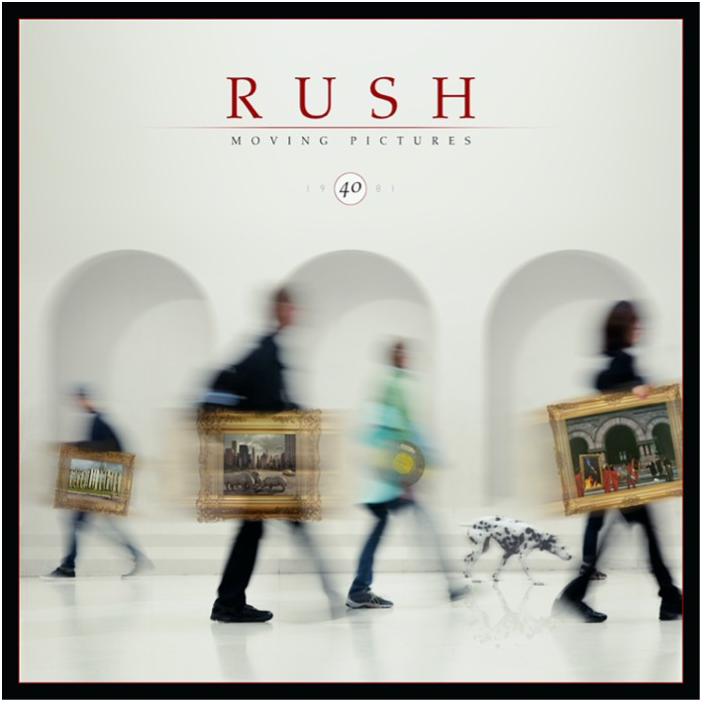 Rush fans are a special breed. Very few are what you'd call "casual listeners." They love Geddy Lee's deft bass lines (I'm looking at you, I Love You Man) and his helium-drenched vocals. They know when Neil Peart switches from 7/8 time to 4/4 time in Tom Sawyer. They know what kind of strings Alex Lifeson uses (they're Dean Markleys, by the way). Which is why many are thrilled that UMe/Mercury and Anthem Records label groups continue the extensive Rush 40th anniversary album series with new, expanded editions of the band’s groundbreaking 1981 release, Moving Pictures, embodying its well-deserved classic album status. Moving Pictures-40th Anniversary will be available to fans in six distinct configurations, including the (1) Super Deluxe Edition, (2) three-CD Deluxe Edition, (3) five-LP Deluxe Edition, (4) one-LP Edition, (5), Digital Deluxe Edition, and (6) Dolby Atmos Digital Edition

Moving Pictures, Rush’s eighth studio album, was originally released on February 12, 1981, and its adventurous yet accessible music catapulted the forward-thinking Canadian band to even newer heights as it began navigating the demands of a new decade. The album’s seven songs expertly blended Rush’s intrinsic prowess for channeling its progressive roots into radio-friendly arrangements, a template the band had mastered to a T all throughout its previous album, 1980’s deservedly lauded Permanent Waves. Moving Pictures was also the second of many Rush recording sessions at Le Studio in Morin-Heights, Quebec, which was ultimately nicknamed the trio’s own personal Abbey Road recording studio.

For Rush fans, no archival oddity is worth leaving in the dust. The bad news: Rush have always been a tidy bunch, never accumulating much of a scrap pile.

“There’s nothing there. There’s nothing left," Geddy Lee told Rolling Stone in 2021, confirming the trio's lack of leftovers. "There might be half-finished demos somewhere where we got halfway through and went, ‘Oh, this song sucks.’ And it never got made.” It's an admirable philosophy: If Rush have recorded any junk over 40-plus years, they've deliberately kept it buried. Why waste people's time with five barely different versions of "Tom Sawyer" when the original is right there, still ready to be savored? But we live in an age when no band's archives stay sacrosanct for too long, when every arbitrary year-marker is an excuse for another reissue. Rush's consistency is, in a sense, a double-edged sword.

Moving Pictures is already the most essential Rush album, their most organic blend of '70s-style prog virtuosity (instrumental monster "YYZ") and '80s new wave punch (hooky price-of-fame sing-along "Limelight"). The set's 40th Anniversary Edition doesn't change that verdict: Without an engineering degree, 99 percent of fans won't be able to detect much difference in the new remaster — that is, outside of the occasional detail that may just be a placebo effect. (Is Neil Peart's triangle more pronounced during the intro of "YYZ," swirling around the speakers? You be the judge.) In short: It sounds perfect, just like before.

The Super Deluxe Edition is stacked with the requisite superficial goodies (extensive liner notes, lavish box, multiple audio formats on Blu-ray) aimed at the nerdiest among us. But the crux of this package is a rattling, previously unreleased 1981 live album, captured in Toronto and spread across two discs. It captures an unvarnished, warts-and-all aesthetic, all jagged edges in contrast to the main LP's smooth contours.

It's always fascinating to hear Rush go ragged, with Lee straining to hit the high chorus of "Limelight" or the full band failing to grasp a solid tempo on the soft-to-soaring "Closer to the Heart." And several of these live tracks are almost punishing in their intensity: Peart’s ringing toms during the big-band jazz section of "La Villa Strangiato," the dynamic shift into hard rock on "Natural Science," the heavy reggae switch-up on "Working Man" amid the multi-track medley.
For die-hards starved for swag, this 40th-anniversary set is worth investigating. But some may selfishly wish Rush had been a bit sloppier back in the day — the band's gain in quality was our (future) loss in quantity.